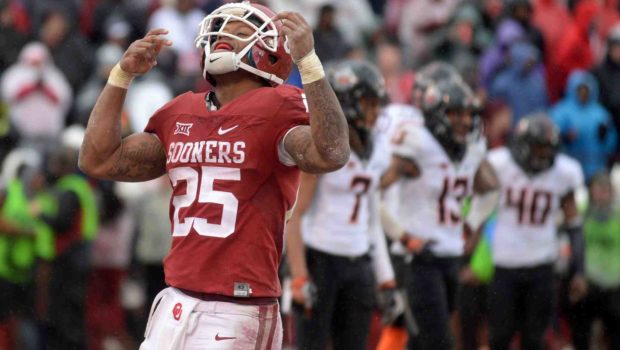 IN TONIGHT’S 2ND ROUND, EAGLES MIGHT PULL THE JOE MIXON TRIGGER!

Joe Mixon, RB, Oklahoma: His drop to tonight’s second round is due to the fallout from his assault of a woman that was caught on tape in 2014, when he punched her in the face and broke her jaw. If a team is comfortable with the potential public relations issue, Mixon is a three-down back.

After a defensive-minded first round, the Eagles pick at 43 in tonight’s second round. Here’s who’s available:

DeShone Kizer, QB, Notre Dame: Blessed with excellent physical tools, he saw three passers taken ahead of him while sitting in the green room Thursday evening. Kizer needs to clean up some issues with his footwork and mechanics, but in the right system and with sound coaching, he could develop into a star down the road. Extreme confidence may have turned some teams off.

Cam Robinson, OT, Alabama: A weak class of offensive linemen produced only two first rounders. That meant Robinson, who starred with the Crimson Tide at left tackle, didn’t hear his name called. He needs to improve some technical issues but is a very capable performer who should become an instant starter. An arrest for marijuana and possession of a stolen hand gun, however, raises character concerns.

Dalvin Cook, RB, Florida State: Widely considered one of the top three backs alongside Leonard Fournette (No. 4 to the Jacksonville Jaguars) and Christian McCaffrey (No. 8 to the Carolina Panthers), Cook tumbled — likely due to concerns about multiple surgeries to his shoulder and knees as well as off-field concerns after multiple arrests. Cook, however, had charges dropped twice and was found not guilty in a third incident.

Malik McDowell, DT, Michigan State: He has played multiple positions along the defensive line, but McDowell needs to improve on his technique and become more effective as a pass rusher. A dip in production in 2016 raised concerns about his work ethic, though an ankle injury likely was a significant hindrance.

Sidney Jones, CB, Washington: He was widely projected as a first-round talent after last season, but a torn Achilles sustained during his pro day workout couldn’t have come at a worst time. Though Jones is expected to have a full recovery, the injury obviously prompted his fall.

Kevin King, CB, Washington: Traits he possesses that may attract teams in the second round are size (6-3) and length (32-inch arms). He is an aggressive player but needs to add some weight and will benefit from time in an NFL team’s strength program.

Chidobe Awuzie, CB, Colorado: An extremely competitive corner who has the versatility to also play safety. But his best spot may be nickel corner.