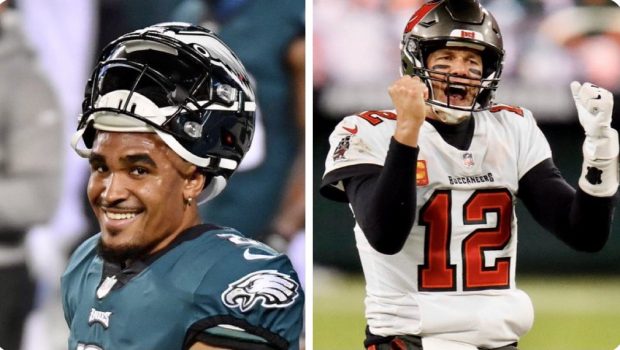 TOM BRADY IS IN ABSOLUTE AWE OF EAGLES JALEN HURTS!

He appears on the weekly SiriusXM podcast with Jim Gray and Larry Fitzgerald:

“I’ve never rushed for more than a hundred yards in a season, I don’t think,” Brady said.

“I mean, he did it for 150 yards in a game and made it look relatively easy because I saw some of those highlights. And he just has a great skill set to be able to — you know, you got to have so much spatial awareness, too, because when you run those guys are coming at you and they’re coming fast. And I think when you have his athleticism, but also he knows exactly when to get down, he knows exactly when to get out of bounds. He starts to run, he stops and he throws the ball, so his ability to make plays in the run game is very impressive. And 157 yards for anybody’s incredible. And then to have the ability to pass the football like he does as well, that’s why that team is so successful.

“He’s playing at a very, very high level, and they’re a tough team to stop. And even if you think you’ve got him stopped for a lot of the game, like the Colts had them a few weeks ago, it comes down to a drive at the end of the game, and he’s got a little more energy left in the tank and he makes a game-winning run there at the end for a touchdown, so it’s hard to defend when you have a dual-threat quarterback. There’s some pros to that and some cons to that, but when it’s on and they’re running the ball like they did, they can control the clock and they can play really good football.”