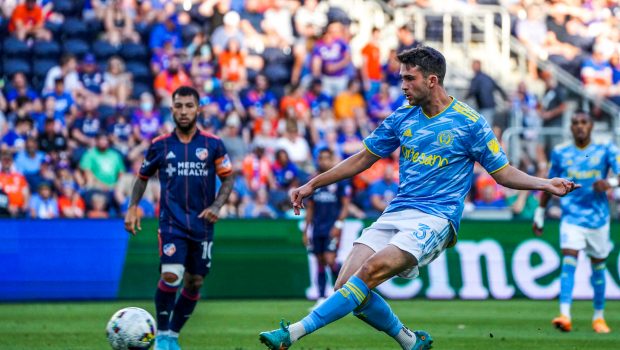 Cincinnati (8-8-8, 32 points) was led by Alvaro Barreal, who assisted on the first score and netted the third. The 21-year-old Argentine midfielder now has four goals and six assists on the season.

It was the first win in MLS play for Cincy since June 24 — a streak lasting seven games.

The Union (12-3-9, 45 points) got a goal back in the 77th minute from Paxten Aaronson, and the loss snapped a six-game unbeaten streak for Philly, as it suffered its third defeat of the season and first since June 29.

After a 0-0 first half, Cincy broke open the scoring in the 50th minute when Barreal — streaking up the left wing — received a fine feed from Luciano Acosta. Barreal, unmarked, then sliced the ball inside the box where Brandon Vazquez easily slotted it home. It was the 14th goal of the year for the All-Star striker.

After Brenner scored his fifth goal of the season in the 55th minute, Barreal tacked on another goal in the 71st. This time, he played a little give-and-go with Acosta inside the box. When Acosta played the ball back to him, Barreal kept his balance against a defender and scored inside the far post.

In his final match with FC Cincinnati, forward Haris Medunjanin replaced Acosta in the 85th minute. He is set to join a club in the Netherlands to be closer to his family.

The Union got off 15 shots but put just two of those on-target. Philadelphia also controlled 52 percent of possession.