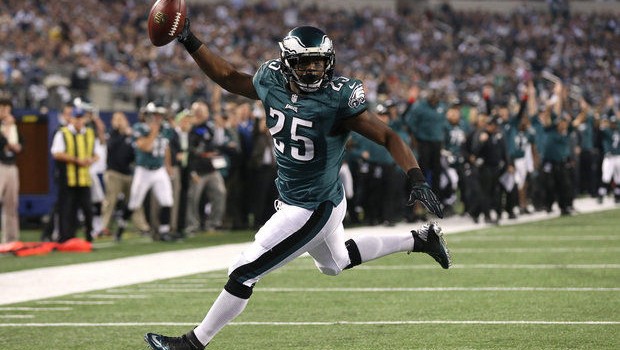 Lost in the hubbub of today’s Eagles-Seahawks NFC smackdown at the Linc is that at the end of the day — probably sooner — LeSean McCoy will surpass Wilbert Montgomery as the team’s all-time team leader in rushing yardage.

”I never thought when I got drafted here that I would hold the rushing record. That’s big. That’s something I’m looking forward to doing,” McCoy said. ”The No. 1 goal is still to win the game, but if there’s a way to do both that would be great.”

McCoy never met Van Buren, who died in 2012, but he played a year alongside Westbrook and is coached by Staley. He’s also friendly with Montgomery, who carried the Eagles to their first Super Bowl appearance in 1980.

”Coming into the league one of my coaches (at Pitt) knew him; they were pretty tight. Then when I got drafted here I talked to him,” McCoy said of Montgomery. ”I got to know him a little bit more when he was coaching with the Baltimore Ravens.”

Montgomery, now the running backs coach with the Cleveland Browns, sent a pre-congratulatory good luck message to McCoy this week.

McCoy said it means a lot that Montgomery likes him as a player and is happy with the mark being passed.

”If I was in his position, I’d feel the same way. Records are made to be broken. You always want the next guy to do well,” he said. ”I remember in college when I broke some of Tony Dorsett’s records and how happy he was. He’s a Hall of Famer. He’s done everything there is to do here and in college. That was quite an honor.”

McCoy still gets advice from Westbrook, who’s tough but not as tough as Staley, who sees even more potential for McCoy.

”He’s something special. I stay on him, but he’s one of the best there is,” Staley said. ”He’s going to do a lot before he’s finished playing.”