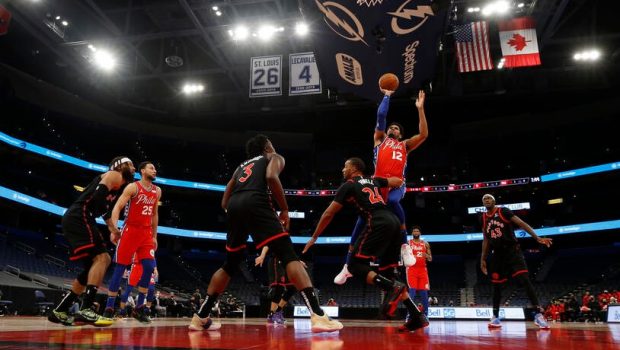 TOBIAS HARRIS, OVERLOOKED FOR ALL-STARS BUT NOT BY SIXERS FANS!

Tobias Harris stepped up big Tuesday to lead the Sixers to a 109-102 victory over the Raptors, the Sixers’ first point-spread cover in their last seven games.

Harris scored a team-high 23 points on 8-of-12 shooting from the field and added seven rebounds and five assists, just a few hours after learning he hadn’t been named to the Eastern Conference all-star team.

Embiid struggled with his shot Tuesday for the second straight outing, missing 10 of 13 attempts and finishing with 18 points. Philly’s superstar center scored just 43 points in two games against the Raptors after scoring at least 31 points in eight of his previous nine.

Ball security continues to be an issue for Philly, which gave the ball away to the Raptors 19 times and was outscored 23-10 off turnovers. The 76ers have committed the third-most turnovers in the NBA this season, averaging 15.7 per contest.