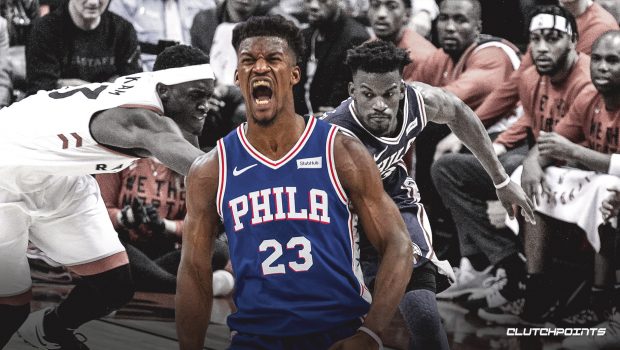 SIXERS GETTING READY TO LOCK DOWN JIMMY BUTLER TO THE MAX!

The Sixers are getting a jump on the free agency period, which doesn’t begin officially until June 30 at 6 pm.

That’s when they can offer free agent Jimmy Butler a max deal.

“I’ve been talking to some executives this week and the executives, I think, now believe that the Sixers will [offer a max contract],” he said. “I don’t know about the fifth year, like, full guaranteed, but yeah.”

Philly acquired Butler in a blockbuster November trade with the Minnesota Timberwolves.

Although Adrian Wojnarowski of ESPN reported after the deal was completed the 76ers and the star forward fully expected to reach an agreement on a long-term deal, the outlook appeared far from set in stone as the season rolled on.

In January, Wojnarowski and Ramona Shelburne reported Butler had “aggressively challenged” head coach Brett Brown about his role within the offense alongside Ben Simmons and Joel Embiid, including a film session interaction other members of the organization deemed “disrespectful.”

Butler averaged 18.2 points, 5.3 rebounds and 4.0 assists across 55 regular-season appearances for the Sixers. The 76ers were eliminated in the second round of the playoffs by the Toronto Raptors.

Philly enters the summer with plenty of uncertainty. Tobias Harris and JJ Redick headline the team’s other potential free agents, and the front office must decide whether Simmons and Embiid can successfully coexist offensively to create a championship core.

For now, it appears the Sixers will make a major push to keep Butler as one of their building blocks.