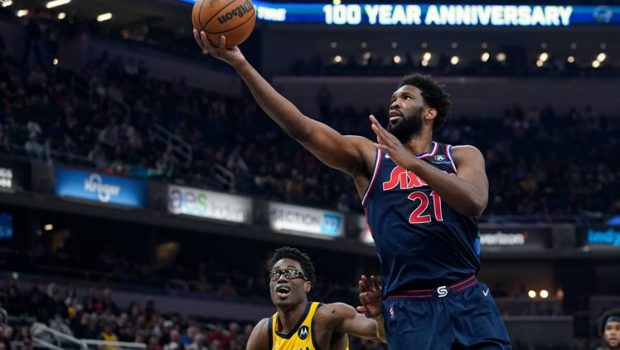 TO SIXERS EMBIID, MVP STANDS FOR MOST VALUABLE PUNISHER!

Joel Embiid had 45 points and 13 rebounds and the visiting Sixers made 17 3-pointers in the first half of a 131-122 victory over the Indiana Pacers that moved the 76ers into a three-way tie with the Bucks and Celts for 2nd place in the Eastern conference.

“They made a concerted effort to trap him on the catch and Joel did the right thing by throwing it out,” coach Doc Rivers said. “The first half was phenomenal. It shows how explosive we can be. The ball was moving and Joel was dominant.”

Embiid played so well he’s now in position to become the first center since Shaquille O’Neal to win the league’s scoring title and he’s the first player since Russell Westbrook in 2016-17 to post 12 games with 40 or more points and 10 or more rebounds.

He banked in a 3-pointer to end the first quarter — a shot that gave Philadelphia the lead for good and spurred a 49-point second quarter.

The Pacers never fully recovered from Embiid’s early onslaught. By halftime, he had 27 points on 12-of-18 shooting with seven rebounds.

“He’s just incredible,” Pacers guard T.J. McCollum said, referring to his former teammate in Philly. “He’s putting his back to the basket and punishing guys and he’s passing whenever he’s doubled and he’s stepping out and making 3s. It’s incredible to watch.”

Tyrese Maxey made a career-high eight 3s, seven in the first half, and had 30 points for the 76ers. James Harden had 11 points and 14 assists.