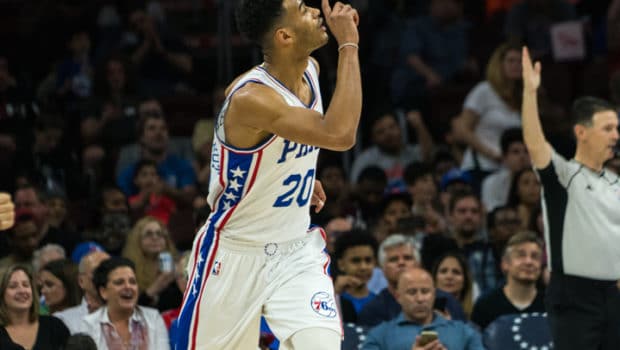 Paul George scored 27 points before he was ejected after a scuffle with Sixers guard Gerald Henderson and the Pacers inched closer to a playoff berth with a 120-111 victory last night at the Wells.

Ex-Sixer Thaddeus Young added 20 points, Myles Turner scored 18 and Kevin Seraphin had 17 to give the Pacers their fourth straight victory and move them within one win (or a loss by the Bulls or Heat) of guaranteeing a playoff spot for the sixth time in the past seven years.

The 76ers (28-53) lost for the seventh straight time and finished with a home record of 17-24. They conclude their fifth straight season out of the playoffs tomorrow night at Madison Square Garden against the New York Knicks.

Timothe Luwawu-Cabarrot (above) paced the Sixers with 24 points and Richaun Holmes had 17 points.

The game got nasty with 2:59 remaining in the fourth quarter when George and Henderson crashed the floor together and exchanged a few shoves. Both players were ejected because of the altercation, which was precipitated by an elbow Henderson threw at George on the previous trip down the court.

“He was throwing jabs, throwing punches at my stomach all night and I didn’t retaliate until late in the game when (the officials) weren’t doing (anything) about it,” George said.

“(Henderson) pulled me down and I got a double technical for doing nothing. And he threw an elbow at my neck and I get another technical for nothing. It was a (crappy) officiating job. It was physical all night and they did nothing after I warned them what was going on.”

Henderson said he didn’t deserve an ejection either, but admitted elbowing George on the play preceding their scuffle.

“He elbowed me in the back and I elbowed him coming back down the other end,” Henderson said. “As I came off the screen I knew contact was coming so I tried to bump him. I didn’t try to hit him in the face, but that’s exactly what happened.”

George said Henderson has played physical against him his entire NBA career, but more so in games played in Philly.

“For whatever reason he doesn’t like getting scored on by me,” George said. “Every time he’s at home I guess that’s when he feels confident. He’s sweet on the road but at home is when he gets (brave).

“Maybe next year I’ll just set some (fine) money aside and I’ll have my get-back. I’m just (joking). Hopefully, the league looks at what happened and they clean that up.”