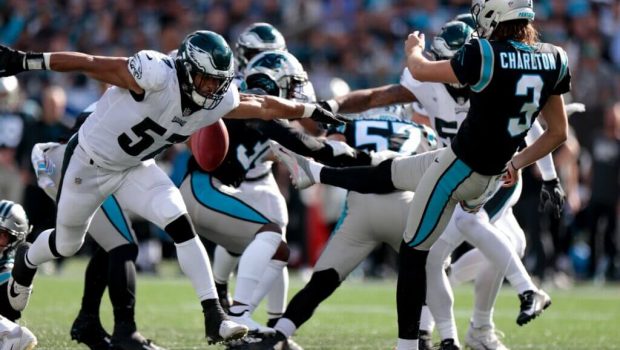 Linebacker T. J. Edwards got his left hand on a punt from Joseph Charlton, giving the Eagles the big play they needed for the win.

“It was something we worked all week,” Edwards said.

“We knew if we got a certain look from them, if they blocked it a certain way, we could switch it and go to a different kind of rush. It worked out perfectly. … It was just like how we drew it up.”

After the block, Shaun Bradley fell on the ball and the Eagles had it at the Carolina 27-yard line.

Then Jalen Hurts led the Birds on the winning drive.

BLOCKED. @Eagles recover the blocked punt at the 27! #FlyEaglesFly