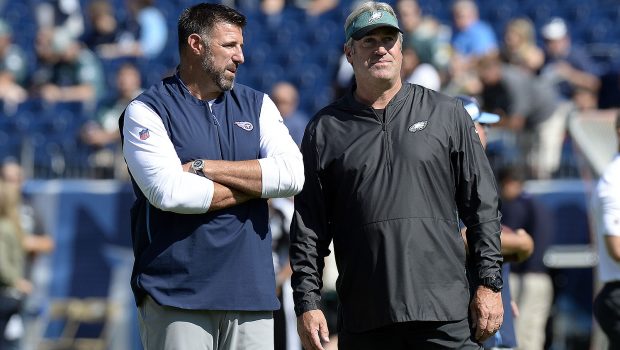 TITANS MIKE VRABEL MAY BE THE EAGLES DOUGIE P OF 2018!

Mike Vrabel has this in common with Doug Pederson:

He seems totally unimpressed with what he’s doing.

Last year, nine mornings before the Super Bowl, I was with Pederson at a Wawa convenience store in south Jersey. No one knew who he was. He liked it that way.

So there was Vrabel, coaching against Pederson and his Super Bowl champs Sunday in Nashville. The game was in overtime. Philly led, 23-20, with 77 seconds left. Tennessee quarterback Marcus Mariota had been drafted for moments just like this one, and for last week, when the 1-1 Titans had gone into Jacksonville and eked out a 9-6 win over one of the AFC favorites. Mariota, playing with some numbness in his throwing hand, got the game ball for last week’s win, and before the game against Philadelphia, Vrabel said to him: “I can’t wait to watch you play this team.”

Fourth-and-two at the Philadelphia 32. Tennessee kept the field-goal unit on the field during a Titans timeout. “But I knew we were going for it,” Vrabel told me over the phone. A couple of players urged him to go for it, and Vrabel said, “Relax, the offense is going back out.”

FMIA Week 4: The NFL at the Quarter Pole and an Overtime-Filled Sunday