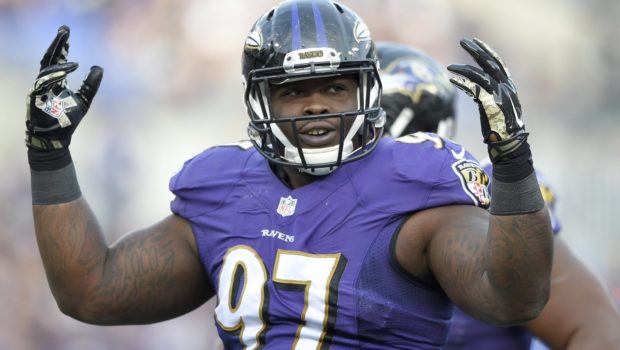 TIMMY FOR BENNIE! EAGLES GET 6-2, 300-POUND JERNIGAN TO REPLACE LOGAN!

The Eagles got defensive tackle Timmy Jernigan and a third round pick yesterday from the Baltimore Ravens in exchange for a third-round pick.

Jernigan, the Ravens’ second-round pick in 2014, fills the void of a defensive tackle Bennie Logan, who signed as a free agent with the Kansas City Chiefs.

Last season, Jernigan recorded a career-high 5 sacks to go with 31 tackles and one interception while starting 15 games for the Ravens. In his three-year career has made 91 tackles, 13.0 sacks and has one interception.

The Eagles were able to swoop in and acquire Jernigan after the Ravens previously committed $54 million to free agent defensive lineman Brandon Williams.

Following the trade, the Eagles now will select with the No. 99 overall pick in the third round, dropping 25 spots from pick No. 74 and own eight total selections in the draft that will begin April 27 on the Benjamin Franklin Parkway.