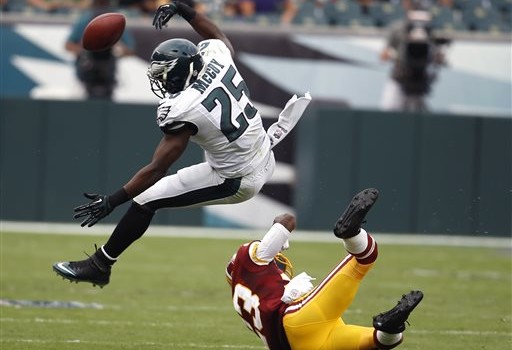 IS IT TIME WE START WORRYING ABOUT SHADY MCCOY’S STRUGGLES?

Shady McCoy seemed stunned by the question posed after yesterday Eagles 37-34 victory over the Redskins at the Linc.

“What struggles?” McCoy said after the game. “I don’t feel like I’m struggling at all.”

After finishing with 22 yards on 20 carries in the Eagles win over the Redskins, McCoy now has a total of 175 yards this season on 60 carries — easily his lowest output since he became a starting running back.

“We didn’t get it done today on the ground,” McCoy said. “Simple as that.”

A big reason for the struggles on the ground is the fact that for part of Sunday’s game, the Eagles were missing four of their five starters on the offensive line. With tackle Lane Johnson suspended, guard Evan Mathis hurt, tackle Jason Peters ejected, and center Jason Kelce in the locker room injured as well, the Eagles were down to patch-work line that was filled with backups.

“We won the game,” McCoy said of whether or not the line was the reason. “No mater whether it’s a starter or a guy we picked up last week, we won the game. We had enough to get it done.”

While the line certainly plays a factor, McCoy’s running does as well.

Throughout his career, the running back has been known to bounce around behind the offensive line. His tendency to do that leads to big plays, but it also leads to plenty of tackles behind the line, something that has happened frequently this season.

The success that backup Darren Sproles has had seems to point to the fact that it is Foles more than the offensive line. Although it is a smaller sample size, Sproles is averaging 6.5 yards per carry this season — over twice the total that McCoy is averaging.

So although McCoy doesn’t seem worried — at least doesn’t want to admit it — the reality is that the Eagles won’t be able to win consistently if they can’t run the ball.