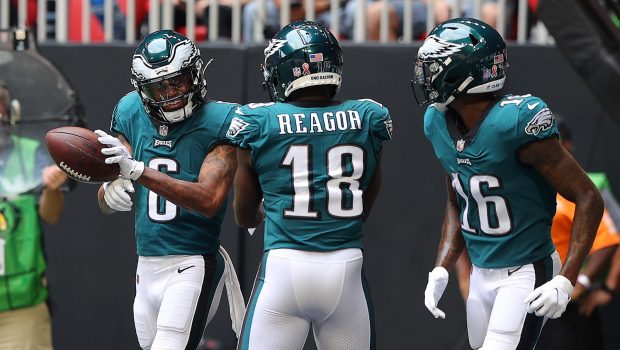 TIME FOR EAGLES RECEIVERS SMITTY, REAGS AND QUEZ TO STEP UP!

Everybody has an opinion about what’s wrong with the Eagles offense.

And we tend to listen to the informed opinions of former Eagles lineman and primo analyst Brian Baldinger:

With their first round pick the Eagles jumped up in front of the division rival Giants to select DeVonta Smith from Alabama. His resume included a Heisman Trophy and many other awards.

After three games in September let’s look at the 3 receivers and how they are doing: Smitty, Reags and Quez as they are sometimes referred to.

I don’t think they are putting fear into anyone as they are 1-2 after three games with two TD’s between the three of them.

All are on the thin and small size compared to other trios around the league like Bengals’ Boyd Higgins and Ja’Marr Chase. But the Birds receivers do have speed.

From what I have seen thus far Quez has been their best player at that position.

He has only been targeted seven times but has caught all seven passes for 186 yards. He is more than straight line speed. He ran a filthy out cut vs. the 49ers for a big chunk play.

He ran right by the Niners for a 91 yard bomb that showed his speed and his ability to track a deep ball. He caught a “7” cut against the Cowboys on Monday Night and leaped over the defender for a big grab. I think the Eagles have to begin calling plays for No.16 because he has earned the right and he looks like he can deliver.

With everything said about Quez being positive I am not down on DeVonta at all. I know he is a worker and has the right approach to the game. He carries himself like a true professional and takes his craft very seriously and it shows.