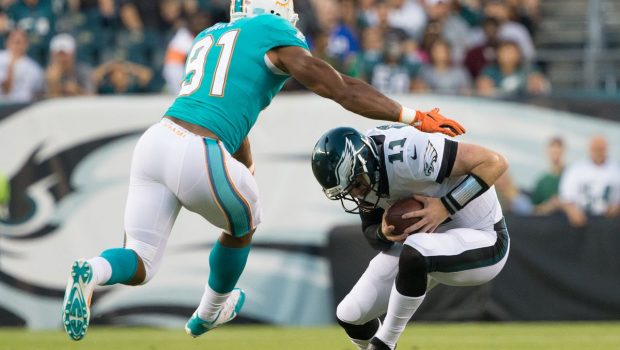 TIME FOR EAGLES CARSON WENTZ TO START EARNING THAT $30M PER!

Eagles franchise quarterback Carson Wentz gets paid $30 million-plus per year to step up and get the Birds a win when push comes to shove, when a win is desperately needed to make the NFL playoffs down the stretch of this 2019 season.

Wentz not only failed to get the dub, but he looked pitiful in the process!

With two interceptions, two lost fumbles, Wentz looked jittery and skittish, not expected out of a fourth-year NFL QB.

But there it is as the Eagles went down 17-9 to the Seattle Seahawks. No crime in losing to an 8-2 team before kickoff, with an MVP candidate in QB Russell Wilson, but it still stings the way it played out.

Of course the rash of injured Eagle players must be factored in:

No Lane Johnson, Jordan Howard, Alshon Jeffery, tough to win without offensive weapons. Then RG Brandon Brooks left the game with anxiety attacks! Wentz had to play with a shell of his team, but that’s where the $30M comes in, he needed to earn that week’s paycheck and clearly didn’t!

Amazingly, the Cowboys loss to New England last Sunday gives the Birds at least an outside chance to salvage the season with the cream puff part of the schedule on the horizon.

Eagles will travel to Miami next Sunday to take on the 2-9 Dolphins hoping to get well next Sunday, December 1st, 1pm/Fox.