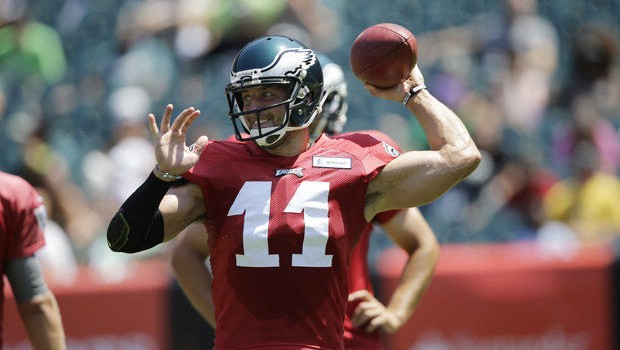 HOW TIM TEBOW HAS IMPRESSED SKEPTICS IN EAGLES CAMP

If I am surprised by anything in the 10-day old Eagles’ training camp it is that Tim Tebow has performed well enough to project onto the 53-man roster as the No. 3 quarterback.

Of course, that means that Matt Barkley will be gone, which is not surprising because he has an arm that was unimpressive even in college — USC, where few QBs make the transition of the NFL, Mark Sanchez notwithstanding.

Eagles’ linebacker Brandon Graham, among others have been wowed by Tebow’s hard work and have mentioned how he’s always in the building, always working.

“Some times I get here early and Tim’s in there,” Graham said. “Some times I stay late, and Tim’ s still here. It’s really something seeing how much he works.”

It’s always been that way for Tebow. It doesn’t matter if he’s the big man on the Florida campus, or a guy trying to win a third-string job after two years away from a game he loves.

“I’ve always tried to be that way, make that my mindset. I learned from my dad at a young age how important passion is. Passion is very different than motivation or excitement. You come out here with passion, it doesn’t matter what happens or what obstacle gets in your way, because you have passion. That’s something real and it’s something deep. Those other things, being excited, being hyped, being motivated all those things they have their ups and downs. Passion sustains you through the good times and the bad.”

His highs were extreme — the Heisman and the national title at Florida, the playoff win for Denver over Pittsburgh. And so we’re the lows — the disastrous trade to the Jets, being released in camp by the Patriots, and out of football since August of 2103.

“That’s a good question,” Tebow said. “It’s through your identity. The blessing that I have is my identity doesn’t come just through the game of football. My identity comes in that I have a relationship with Jesus Christ and I’m a child of God. When your identity is found is something solid and not wavering, then I’m to wavering. I’ve said this many times I’m thankful I don’t have to live that roller coaster that so many in the world do.

“I’m able to live with a purpose and passion and that gives you a freedom that you can come out here and just do your best and try to be the best you can be.”

Tebow had another good day, Tuesday. His throwing motion that was his undoing in the past is greatly improved. All the work he put in the past two years, the guidance of former baseball pitcher Tom House seems to have worked.

Now, come Sunday he’ll be back in a real game for the first time in two years when the Eagles host the Indianapolis Colts in the preseason opener.

“I hope I’m getting better,” Tebow said. “I put in a lot of work. There’s no question I’m looking forward to the game. I love the game and it’s something that I missed. But we had a (family) Turkey Bowl last year that was really intense.”

The quarterback starts laughing as he tells that story. He’s having fun again, not that he ever stopped.

It’s just he’s back on a football field where he belongs, and he’s out there longer than anyone else.