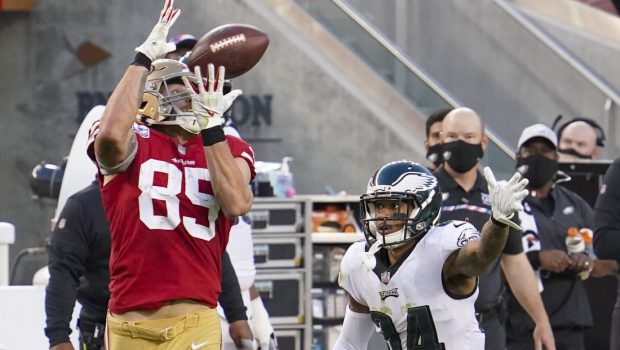 Kittle had a huge night after his two-week absence with a knee injury, catching 15 passes for 183 yards in the loss to the Eagles.

Kittle achieved those numbers with backup quarterbacks (both Nick Mullens and C.J. Beathard), and few options around him at receiver and running back, which is why he had around 60 percent of the team’s passing yardage (338).

“Just looking at the numbers George had an unbelievable game,” 49ers coach Kyle Shanahan said, via Jennifer Lee Chan of NBCSportsBayArea.com. “Didn’t realize it was like that. He got open a lot and even when he didn’t he didn’t he was able to come down with the catch.

“That’s something George has worked on for a while, and came through today for us in that way.”

Kittle wasn’t able to hang onto a two-point conversion late, but that was the only problem on his night. They’d like to have a more diverse offense, but with the way Kittle played, it’s also tempting to keep funneling it to him.