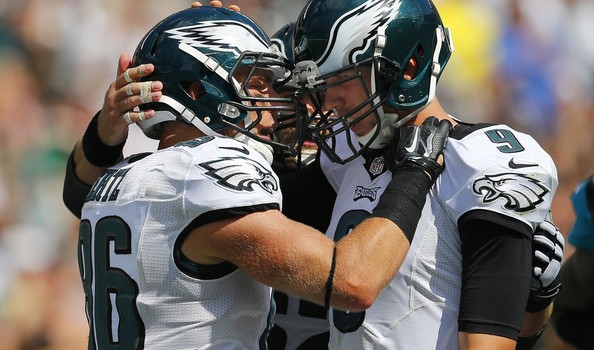 ERTZ HAS FOLES' BACK AGAINST BUZZ BISSINGER AND THE WORLD

Zach Ertz is tired of all the criticism Eagles QB Nick Foles has been getting from the media, especially Buzz Bissinger.

“The whole ‘you have to be a tough guy to be a leader in this league’ is misconstrued,” Ertz said on Thursday. “Nick is a great leader….I played with (Colts) Andrew Luck for three years (at Stanford), and he’s the nicest guy out there. He is never going to call a teammate out on the field.”

Over the summer, Foles’ personality was the topic of a cover story in Philadelphia magazine, in which author Buzz Bissinger said Foles would never win a Super Bowl because of the way he carries himself. Bissinger took the criticism a step further last month, when called Foles a “chicken.”

“I saw the article,” Ertz said. “Very eye-opening. People think they know somebody on whether he gives an interview or not.

“You guys don’t know Nick. Nick is very well trained in the media. He is not going to give quotes that are going to rile up the opposing team. We know what Nick is like out on the practice field, and how hard he works.”

While fans and media members don’t get to see Foles behind the scenes on a daily basis, they did get a sneak peak into how the quarterback is during games this past week, when a video clip of Foles getting in the face of a referee was released by NFL.com. Even that, however, has been criticized, as some say it was “forced” and not genuine.

“He didn’t know that he was mic’d up,” Ertz said. “That’s the last thing he had on his mind. He was just focused on the Giants.”

Whether or not Foles can win in the NFL long-term remains to be seen. Inside the Eagles locker room though, which is where it matters most, there seems to be little question about if Foles has what it takes from a personality standpoint to succeed.

“Isn’t there better stuff to talk about?,” Ertz joked.

In recent weeks though, especially against the New York Giants in Week 6, Ertz, Brent Celek and even James Casey — who has been used primarily on special teams and as a run blocker since signing with the Eagles in 2013 — have gotten into the act in the passing game.

Against the Giants, the Eagles trio of tight ends accounted for eight receptions for 118 yards and a touchdown each from Ertz and Casey.

“I think each week the tight ends are involved, certainly,” Shurmur said prior to Wednesday’s practice. “There are a lot of times when we’ll have two or three on the field at one time. In terms of opportunities, we’ve just got to play our game, and the production will sometimes show up when you least expect it.

“We hit James [Casey] on a keeper the other night because we had been running a play that looked very similar. It’s part of — we were under center in that situation. So tight end production kind of shows up in bunches.”

Count Ertz among those most excited to see Casey come down with his first touchdown as an Eagle two weeks ago.

“It was great,” Ertz said. “You saw how excited Brent and I were. We all three kind of jumped up, the picture’s all over the internet. But James works so hard. He’s an unbelievable special teams player. When he gets an opportunity to make plays on offense, it’s just another thing he does. It’s a lot of fun when he gets into the end zone.”

Ertz, the Stanford product, is rapidly becoming a star in this league and much of that is due to the fact that he has both the size and ability to play not only inside as a tight end but split out wide as a receiver as well.

Last season against the Cardinals Ertz had what amounted to his coming out party, hauling in two touchdowns after a quiet start to the season.

“Hopefully I have a lot of opportunities to make plays. I think I showed last year and this year that whenever I have my number called I have the ability to make big plays.

“That’s what I want to instill in my teammates that I have the ability to make the plays. Whether it’s this game or the rest of the season. I think I can do it.”

Cardinals defensive coordinator Todd Bowles’ scheme seems to funnel much of the passing game to the inside of the field because of the play of big physical corners Patrick Peterson and Antonio Cromartie on the outside. It’s no surprise then that Ertz had a big game last season against Arizona, and the tight ends could once again be a focal point this week because of Bowles’ system.

“The tight ends in the past have had a little success against them,” Ertz explained. “Hopefully that continues this week. They have very physical corners, the best run defense in the NFL and they’re very good all around.”