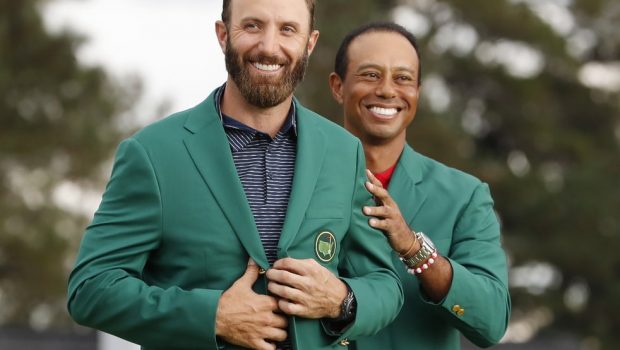 By Sandra Kelly in Augusta

It represented the passing of the golfing torch.

Or, in this case the passing of the Masters jacket, from last year’s winner Tiger Woods.

Dustin Johnson scored his five-shot victory with the lowest score in tournament history.

Johnson overcame a nervous start that conjured memories of past majors he failed to finish off, and then delivered a commanding performance that added his own touch to a Masters unlike any other. Because of the COVID-19 pandemic, it was the first played in November. It was the first without ropes and without roars because patrons were not allowed — only one guest for each player, coaches, Augusta National members and officials.

Leading by two shots heading into Amen Corner, the world’s No. 1 player got through the 12th hole — where Tiger Woods earlier hit three balls in Rae’s Creek and made 10 — and then ran off three straight birdies to pull away from Cameron Smith and Sungjae Im, the only players who had a chance.

Johnson closed with a 4-under 68 and finished at 20-under 268, breaking by two shots the record set by Woods in 1997 and matched by Jordan Spieth in 2015. He had only four bogeys in 72 holes, another record, this one held by Jack Nicklaus and Jimmy Demaret. He missed only 12 greens all week, a record last set by Woods. All that mattered was that green jacket.

Nothing ever comes easily for Johnson in the majors. Nothing looked so natural as seeing Woods, the defending champion, help him into that size 42 long in Butler Cabin.

“Having Tiger put it on was awesome. You wouldn’t want it any other way,” Johnson said.