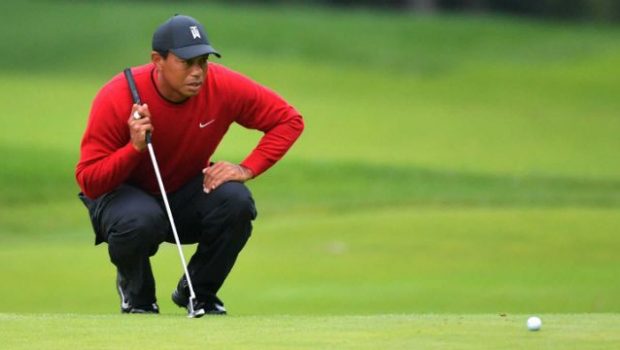 TIGER FINISHES 3 BACK AT BMW, BUT LIVES TO PLAY ANOTHER DAY!

He ended up finishing three strokes behind Keegan Bradley, who defeated Justin Rose in a one-hole, sudden-death playoff.

But but he drew within a stroke of the lead twice, and he qualified for the tour championship event at East Lake in Atlanta in two weeks.

His troubles dated to Friday, when he followed up an eight-under opening day with an even-par round, which, on a course as soft as Aronimink was playing, was the equivalent of moving backwards.

Woods finished Saturday with another four-under round, then waited out the rain on Sunday and teed off Monday at -12. A four-under front nine put Woods right on the heels of leadersJustin Rose and Billy Horschel, but he stumbled with bogeys on 10 and 14 and couldn’t keep pace.

Two back of the leaders at -17, Woods couldn’t sink an eight-foot birdie putt on 17 that would have drawn him back within a stroke of the lead. He finished the tournament at -17, not good enough to win, but more than good enough to keep himself in the FedEx Cup conversation.

“I’ve played a few tournaments where I came close at the end, but just didn’t quite get the W,”Woods said afterward. “But to get to the end of the season and make it to the Tour Championship, considering what I’ve been through, is a pretty good accomplishment.”

Woods easily worked his way into the final 30 headed to East Lake for the Tour Championship, an impressive feat given that he only started playing serious tournaments in late January of this year. (Jordan Spieth, among many other notable names, didn’t make the cut.) Woods has missed the cut in only two of the 18 tournaments he’s played to date.