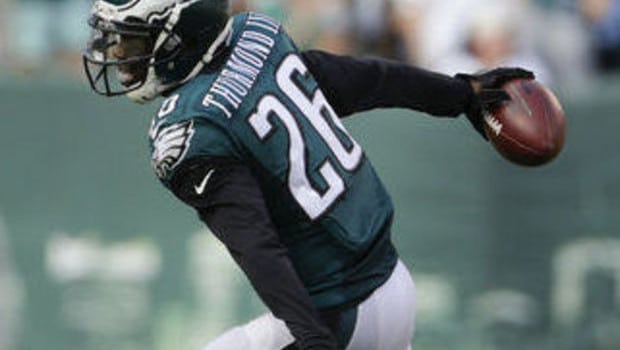 THURMOND THINKS EAGLES CAN STILL BE SUPER THIS SEASON

Unlike virtually everyone on the Eagles, safety Walter Thurmond has ridden in a Super Bowl parade — as a member of the Seattle Seahawks in 2014.

So Sunday’s night’s 27-16 loss to the unbeaten Carolina Panthers Sunday night hasn’t dissuaded Thurmond from believing that a Vince Lombardi trophy is still within this team’s reach!

“I think we have what it takes to go win a championship,” Thurmond told NJ.com Monday night at a charity event for his foundation The Walter Thurmond Foundation For Arts and Education.

“If you look at all of our losses, it’s a situation where we’re just beating ourselves. We realize this. We have a very good football team, even though our record says otherwise.

“We know what we have in that room. It really comes down to us having to execute in all phases of the game and we can’t beat ourselves. That’s the biggest thing. Just like last night and the other games we’ve played in, it just comes down to us not executing where we needed to and unfortunately not making it happen.”

Thurmond spent last season as a member of the Giants, but was sidelined for all but two games with a torn pectoral. This season, the 28-year-old has been one of the most consistent players in what has developed into a very consistent secondary.

Through seven games Thurmond has 34 tackles and three interceptions, after making the switch from cornerback to safety, a position he had never played before, in the latter stages of training camp this summer.

“We have a lot of hard working guys dedicating ourselves to the betterment of the team,” Thurmond said of making the position change. “That’s one of the reasons why I moved to the safety position to give us the best group of guys we could have out there.

“At the end of the day, the ultimate goal is to win a championship. We have three out of four guys in the secondary having won championships. We know what it takes to be out there. It’s really a selfless attitude when you get to that point. We understand that. It’s just about going out there to make it happen.”

The Eagles enter the bye week at 3-4, but only trailing the Giants by one game for the NFC East lead. Thurmond says he firmly believes this team is going on the bye week and the perfect time.

“If you talk to a lot of guys around the league,” Thurmond said. “Having the bye week around Week 8, Week 9 or Week 10, you can rest up to make that push going into the post-season. Guys are banged up, guys are tired from all the preseason games and all the regular season games. I think it’s a good time to have this bye right now to be able to move forward.”