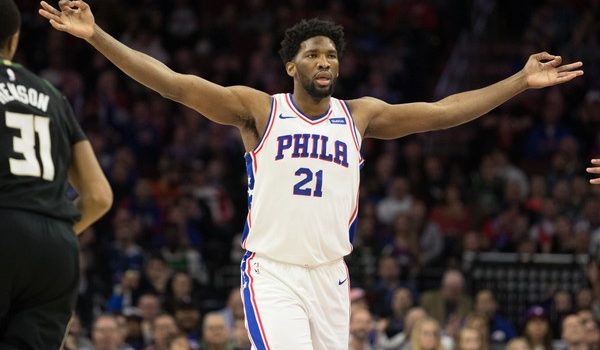 It carried over from Oklahoma City’s triple-overtime victory in Philadelphia in December.

“Leading into this game, after a little talk after game one, I think to this game, I kind of was looking forward to it,” Westbrook said. “But you know — Oklahoma City 2-0.”

Westbrook made just 6 of 20 shots in the first half, when he was knocked to the ground trying to take a charge as Joel Embiid threw down a vicious dunk over him. He was 8 of 13 in the second half and also had 14 assists and nine rebounds.

George shot 9 of 17 a day after being named the All-Star replacement for New Orleans’ DeMarcus Cousins. The Thunder are 7-0 when George scores at least 30 points and 11-4 when he scores at least 25.

Embiid had 27 points and 10 rebounds, and Ben Simmons added 22 points for the 76ers.

George hit a 3-pointer at the first-half buzzer to trim the Sixers’ lead to 58-57.

A dunk by Simmons put the 76ers up 75-68 early in the third before the Thunder got things going. Oklahoma City went on a 12-0 run, and a reverse layup by Westbrook put the Thunder up 86-79 and forced the 76ers to call timeout. George closed out the surge with a 3-pointer that put Oklahoma City up 10.

The Thunder led 92-83 at the end of the third. Oklahoma City shot 60 percent from the field in the period and held Embiid to two points.

Philly left its starters in to start the fourth, and they helped the 76ers take a 98-97 lead early in the quarter.

Oklahoma City pulled away late. Westbrook’s 3-pointer with just under three minutes to play put the Thunder up seven, and he followed with a jumper to make it a nine-point game with two minutes left.

“We made runs, they made runs,” Simmons said. “But down the stretch, we didn’t take care of the ball and execute.”