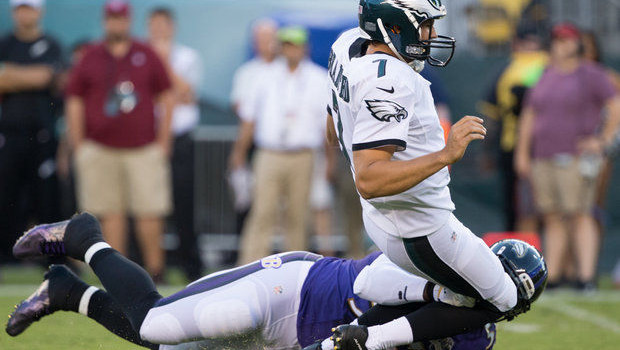 When you are in a hole, stop digging; or

Take responsibility for your own actions!

Instead, he is blaming his own general manager, Ozzie Newsome for the controversy over his cheap shot on Eagles quarterback Sam Bradford last Saturday night (above).

On Wednesday at Ravens training camp, Suggs smiled as he suggested who was really to blame for this week’s firestorm surrounding his low hit on Bradford.

The tackle brought a 15-yard penalty against the Ravens, shots at Suggs’ character from Eagles players and several days of headlines about the incident written by Philly, Baltimore and national media.

“If we’ve got anyone to blame, it’s our own: [general manager] Ozzie Newsome,” Suggs said. “He’s on the competition committee. He kind of helped put the rules [protecting quarterbacks] in, so we’ll probably have to talk to Ozzie about that.”

Suggs said he’s talked to Newsome about the rule, and Newsome has told him “quarterbacks keep a lot of people employed, so we’ve got to protect him.

“Those guys get a lot of our sponsors,” Suggs said. “A lot of those guys are good-looking guys. You don’t want to damage them too much. It’s the most valuable position on the field.”