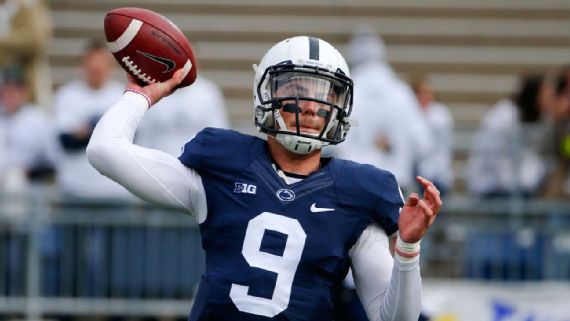 In his first season as a starter in 2016, Penn State QB Trace McSorley led the Nits to their first Big Ten title since 2008, a Rose Bowl berth, and an 11–3 record and no. 7 ranking in the final AP poll.

Running back Saquon Barkley got all the early attention in 2016.

But McSorley was a terrific finisher, throwing for 3,614 yards with 29 touchdowns and only eight interceptions.

Late in the third quarter against Minnesota that was the turning point of Penn State’s season, McSorley showed his deep-ball potential. The Nittany Lions were then 2–2, coming off a 49–10 thrashing at fourth-ranked Michigan, and entered halftime against the Golden Gophers down by 10. After pulling his team even at 13, McSorley stepped up to his own 41-yard line and called for the ball.

He catches it in the shotgun and drops back three steps. The pocket begins to collapse immediately, so McSorley moves right and races toward the line of scrimmage. He keeps his eyes locked downfield, then unleashes. Tight end Mike Gesicki is wide open, corrals the ball at the Minnesota 23, and rumbles to the 6 before being taken down. Two plays later, Trace runs in to score a touchdown in what would become a 29–26 win.

“We do it a lot of times in practice,” McSorley told PennLive lastNovember, speaking on throwing deep on broken plays. “Coach [Joe] Moorhead is always saying, ‘Move in the pocket with your eyes downfield. Never let your eyes look at the rusher, always keep your eyes up.’”

The deep ball is a dying art, both in college and the NFL, as teams are increasingly opting for shorter, safer passes and spreading the field horizontally more than they are vertically.

Yet while others moved toward conservative play-calling, Penn State doubled down last season. McSorley passed for 9.3 yards per attempt; of quarterbacks whose teams finished in the top 25, only Oklahoma’s Baker Mayfield and Western Michigan’s Zach Terrell finished with a higher average.

The Nittany Lions’ offense was consistently dangerous from deep, with more than 41 percent of its touchdowns coming on plays of 20-plus yards. Clemson, which won the national championship and boasted its own explosive offense, checked in at 26 percent in the same metric. With such a large share of Penn State’s success last year dependent on McSorley’s gunslinging tendencies, it’s a safe bet to assume he’ll keep throwing deep this fall.

Still, don’t think that McSorley throws deep simply for the sake of it. He’s patient, scanning the field for good matchups. “Not only is he throwing the deep ball well,” Moorhead told USA Today in December. “He’s throwing it to the right person when he’s open.”

Expectations are high in Happy Valley this season. Barkley and McSorley are both Heisman Trophy candidates, and Penn Statereturns 16 starters, including Gesicki, who many believe is among the best tight ends in the country. Yes, the sixth-ranked Nittany Lions have to replace 24 starts on the offensive line, and their schedule is tough, particularly during a three-week stretch from October 21 to November 4 when they have to play Michigan, Ohio State, and Michigan State in succession. Still, they have the playmakers to build on their success. And McSorley is the leader to guide them.

Throwing the ball deep can sometimes leave Penn State open to mistakes, but with “All the Marbles” making decisions under center, there’s a good chance they’ll end up in the playoff hunt once again. Just ask Moorhead, who praised his young quarterback’s gunslinging impulses earlier this month.