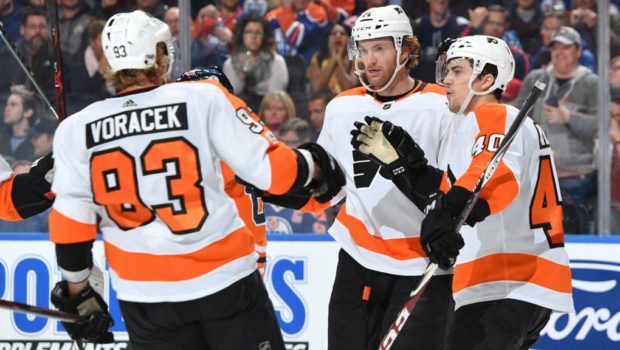 The Flyers have just won three games out west, so what’s up with that?

“Since I’ve been with the Flyers, I don’t think we’ve swept the West like that,” Claude Giroux told NBC Sports Philly. “It’s good for our confidence. We changed a couple of things, the way we play and our identity as a team, and everybody’s bought into it.”

“We had to buy into something,” goaltender Brian Elliott said. “Everybody’s understanding their role and where they’re supposed to be on the ice, and simplifying things a little bit. Along with that we’re making the smart decisions and not turning pucks over at the blue line.”

“We knew it was going to come,” Jake Voracek said. “We’ve played some good hockey the past three games. We could have scored more than one tonight, especially in the third, we had lot of chances. I think I’m more experienced now. I’m almost 30 years old. I’m making more simple plays than I used to, so that’s a good thing.”

“He did a great job,” defenseman Andrew MacDonald said of Elliott. “It’s never easy for a goalie to be put in a back-to-back situation. We were a little slow out of the gate and they came out pretty hard, and he made some crucial saves early that let us just calm down. That’s the veteran goaltending presence that he brings.”

Overall, Elliott stopped 36 of 37 shots, and 103 of the 108 shots he faced on the road trip for a .950 save percentage. He also earned his 200th career victory, becoming the 87th goalie in NHL history to reach that milestone.

“We have a lot of character in this room, and like I’ve said before, it’s one of the tightest groups I’ve been with,” Giroux said. “We’re playing as a team and let’s keep rolling here.”