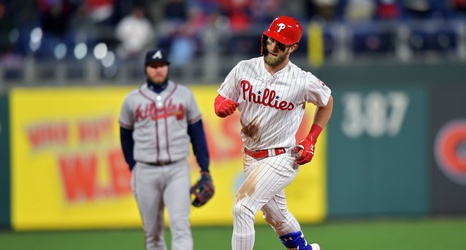 It’s only June 14, so it may seem premature to place too much importance on this Phillies-Braves series in Georgia.

But I am going to do it anyway because it has playoff implications.:

The Phils head into the matchup after a dominant performance by Zach Eflin. Eflin pitched eight innings, giving up two runs on five hits with nine strikeouts against Arizona.

The Braves are 10-8 against opponents from the NL East. Atlanta has a collective on-base percentage of .332, good for third in the National League. Freddie Freeman leads the team with a mark of .397.

The Phillies have gone 15-9 against division opponents. They have hit 82 home runs as a team this season. Jay Bruce leads the club with 19, averaging one every 10.4 at-bats.

Freeman leads the Braves with 83 hits and is batting .311. Ozzie Albies is 12-for-35 with three doubles, a triple, three home runs and seven RBIs over the last 10 games for Atlanta.

Bruce leads the Phillies with 32 extra base hits and is slugging .586. Scott Kingery is 9-for-36 with two doubles, a triple, four home runs and eight RBIs over the last 10 games for Philadelphia.