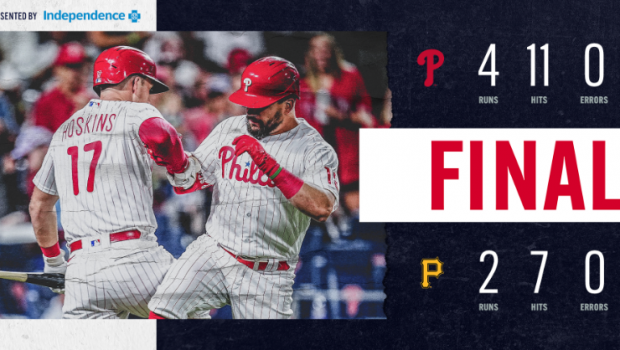 THIS WAS A WIN THE PHILLIES WOULD HAVE LOST LAST YEAR!

Rhys Hoskins launched a monster jack off Pirates reliever Duane Underwood Jr. in the 10th inning for his 20th home run of the season as the Phillies rallied for a 4-2 win.

Hoskins finished off the third four-hit night of his career by taking advantage of a mistake in location by Underwood (0-3), who was ahead in the count 0-2 when an 89 mph cutter found way too much of the plate. Hoskins drilled it to lift Philadelphia to its third straight victory.

“A big win,” Hoskins said after reaching the 20-homer plateau for the fourth time. “It’s not real late in the season yet, but it’s also not early. You need every win you can get. You need to win games like these.”

Hoskins and Kyle Schwarber pulled the Phillies out of a two-run deficit by hitting consecutive RBI singles in the seventh. The bullpen — shaky in a win on Thursday night — kept the Pirates in check long enough for Hoskins to pull it out.

“He’s huge because he’s an on-base guy and a slugger,” Phillies interim manager Rob Thomson said. “He’s a lot of things. (Schwarber and Hoskins) hitting 1-2 have created a lot of runs for us this season.”

Nick Castellanos, Alec Bohm and Matt Vierling had two hits apiece for Philadelphia. Seranthony Dominguez (5-3) retired the Pirates in order to force extra innings and Connor Brogdon worked a perfect bottom of the 10th to pick up his first career save.

Ke’Bryan Hayes hit his fifth home run of the season for Pittsburgh and collected his third three-hit game this month, but the Pirates’ bullpen faltered late to send the club to its fifth consecutive loss.

“(Underwood) misses right down the middle to a guy that needs 20 homers, you just can’t do that,” Pittsburgh manager Derek Shelton said. “You have to execute pitches, and we did not do that after (José) Quintana came out of the game.”