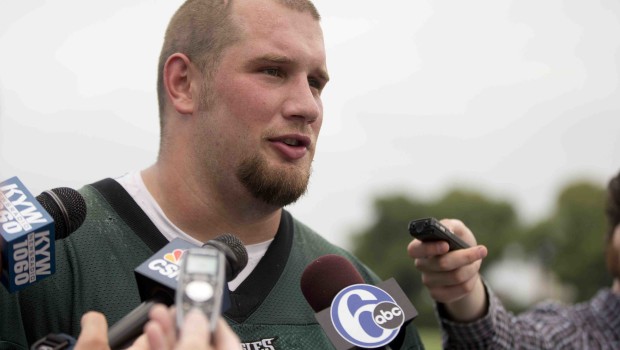 'THIS SUCKS' IS HOW EAGLE LANE JOHNSON STARTS HIS MEA CULPA

As everyone besides Vladimir Putin must know by now, Eagles tackle Lane Johnson was suspended by the NFL for the first four games of the season due to a violation of the league’s policy on performance-enhancing drugs.

“This sucks,” Johnson said after reporting to the NovaCare Complex for the start of training camp. “The toughest part of it is I’m not going to be around here to battle (when the season opens).

Johnson was the fourth overall pick in the 2013 draft. He started all 16 games as a rookie. After a rough start, he found his stride and played very well the second half of the season.

Johnson was informed in mid-May that he tested positive for a banned substance. He appealed the test result, but his appeal was rejected.

The 24-year-old University of Oklahoma product wouldn’t say exactly what banned substance he took. He said it was a prescribed drug he took briefly in April for a medical issue. He said the drug was prescribed by his family physician.

Johnson said he was back home in Texas when he took the drug, which was why he didn’t run the drug past Eagles trainer Chris Peduzzi before using it.

“That’s not an excuse,” he said. “If you take anything, you’re supposed to talk to the head trainer. That was my mistake. And I’m paying the price for it.

“The toughest part is I let the team down. I let the fans down.”

All-Pro left guard Evan Mathis said, “It’s not a good situation there. Lane did something that was not very smart. It’s not like he was taking something for an extended period of time. He got caught in a small window doing it, thinking it was OK to take it because he had a prescription. If he had gone through the proper channels, it would’ve been taken care of.”

“It’s something I just have to deal with for four weeks,” Johnson said. “The toughest part is going to be not being able to even be around here. I can’t play. I can’t practice. I’m trying to find someplace to train (during the suspension) so that I can keep in good football shape and come back and play well.”

Johnson, a former quarterback and tight end, clearly added muscle and weight during the offseason. His physique undoubtedly will make outsiders skeptical about his prescribed-drug-for-a-medical-issue explanation.

“That’s people’s opinions,” he said. “There’s nothing I can do to stop it or prevent it. This is my mistake. I brought this all on myself. It’s something I’ve got to deal with. I let my teammates down. I let (coach) Chip (Kelly) down. I let (general manager) Howie (Roseman) and everybody else in the organization down. That’s the biggest deal with it.”