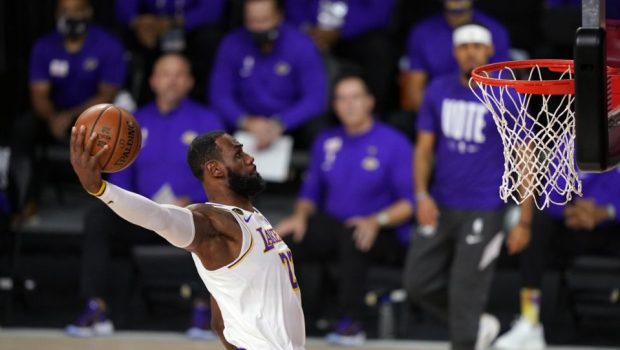 And all the talk this morning isn’t about the game.

It’s about LeBron James vs. Michael Jordan as the NBA’s GOAT.

James, the NBA Finals MVP, scored 28 points and had 14 rebounds and 10 assists, winning the Finals 4-2 for the franchise’s 17th NBA championship.

That fourth title probably isn’t going to sway to the pro-Michael crowd. Jordan, after all, has six titles in six finals appearances, none of which went past six games. LeBron is just 4-6 in the Finals, although his 10 Finals appearances, including nine of the last 10, is a resume line in and of itself.

However, the Lakers are the third franchise LeBron has led to the Larry O’Brien Trophy, and make no mistake, he led the Lakers there. They won just 35 games the year before he arrived two seasons ago. Anthony Davis came a season later in a blockbuster trade, but LeBron’s presence was part of making the Lakers attractive.

In terms of the MJ-LeBron battle, this is a plus on James’ side. He’s now the central figure (or co-central figure) for four championships on three completely different teams.

He joined Dwyane Wade and Chris Bosh (not to mention Ray Allen, Shane Battier and others) to form a supersquad in Miami and won twice. He then returned to Cleveland to carry a lesser group to a heroic 3-1 Finals comeback against the mighty Golden State Warriors. Now he took over a hibernating Lakers franchise and won again.

Michael Jordan didn’t do that.

That doesn’t mean Jordan should be punished for it. After all, he didn’t have the opportunity to do that. He played for the Chicago Bulls only (at least until a forgettable couple of years with Washington at age 38 and 39).

Despite Jordan’s many feuds with Bulls management, the franchise was expertly run and coached when he was there. Jerry Krause, Jordan’s archenemy and the Bulls’ GM, deftly rebuilt the supporting cast around the triumvirate of Jordan, Scottie Pippen and coach Phil Jackson.

If LeBron had that kind of stability and talent around him, he may never have left Cleveland in the first place. Instead, he had to bail due to mismanagement.

In Miami, he found not just great players, but the Pat Riley-dominated culture of the Heat. After four years and four Finals, James took what he learned, returned to Cleveland and finally delivered a long-awaited title to the fans of Northeast Ohio. He felt he owed them that.

Still, Cleveland could never get it all together. James getting the Cavs even a single title makes local fans celebrate the era. Yet at some point basketball historians will look back and wonder how Cleveland could have had one of the greatest — if not the greatest — player of all time (or certainly his generation) for 11 seasons across two stints with the club and collect just one championship.

In terms of the Jordan debate, the entire thing can now be reframed — and that’s with LeBron still capable of adding a fifth championship or more to his collection. L.A. should be a favorite heading into next year also — if anything, this title came a year early. And while James will turn 36 in December, there clearly is still something in the tank.

For a long time, the knock on LeBron was that he feasted on the weak Eastern Conference. Well, that’s over. The Lakers own the West.

By rebuilding the Lakers almost overnight, LeBron can counter Jordan’s perfect record in the Finals (something he obviously can never match) with an entirely different perspective (that Jordan can never match).

LeBron has won wherever he went. Find a team, and LeBron will deliver a title.

He is capable of overcoming dysfunction, rebuilds, different coaches and uncertainty with a combination of talent, attitude and leadership. He is the X-factor.

Is that better than a 6-0 Finals mark for Michael Jordan with a brilliantly operated Bulls organization?

If nothing else, it’s a new twist in the old debate.