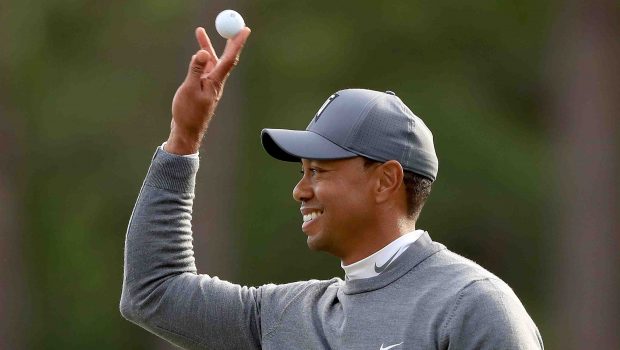 THIS MAY BE TIGER WOODS’ LAST, BEST CHANCE TO WIN THE MASTERS!

As long as he plays this game, Tiger Woods will be the biggest draw in golf.

This is as true in the pre-Masters media room, where a wall-to-wall theater of reporters greeted Woods on a rainy Georgia afternoon, as it is on the tees and fairways of Augusta National, where Woods always draws the thickest, deepest galleries.

Whether he was shaking and waking up the game in his early years with an unmistakable new color scheme of trademark red shirts and game-changing brown skin, or he was taming and shaming Augusta’s real estate with his peerless long drives and fearless short putts, whether he was returning amid the azaleas blushing with embarrassment over personal foibles or traversing Magnolia Lane brimming with perspective over almost having lost it all, Woods is always the Masters’ main card.

“I just wouldn’t rule him out,” said rival Phil Mickelson, the three-time Masters champ, or one fewer than Woods. “I’ve seen him do things with a golf ball and perform at a level higher than anything I’ve seen in the game. I just would never rule him out. To see him play the way he did with such control at the Tour Championship [which Woods won last fall] and compete in the majors the way he did at the British and PGA [in which Woods finished tied for sixth and second, respectively], I just think that greatness is still in him, and I would never rule him out.”

The Woods of Mickelson’s vantage point is certainly an interesting one. Remember, it was only a year ago the two were yukking it up together in their pre-Masters preparations, having played their first-ever Augusta practice round together, a pairing that seemed to divest their long-standing frenemy status of its enemy component. That they would go on to stage a pay-for-view match-play challenge might have been a dud for what it gave us on the course, but it was valuable nonetheless for what it showed about their shared growth off it. The chasm that used to divide them — Woods on one side with his uber-competitive unapproachability, Mickelson on the other with his everyman popularity — was no longer so wide.

But Woods doesn’t seem to need help anymore at letting the world in on the man behind the golfer. The years of turmoil, some embarrassing extramarital affairs, a public, painful divorce, a scary, drug-addled traffic stop, and an aching, twisted back changed his perspective in profound ways. Woods was completely serious when he walked in here a year ago thanking the miracle that allowed his body and mind to heal enough for him to play at all.

And he’s just as serious now that the healing that allowed him to stage such a brilliant run of golf from April to September assures him he can finally get that elusive 15th major.

“I feel like I can win. I’ve proven that I can do it,” he said. “I just feel like that I’ve improved a lot over the past 12, 14 months, but I’ve more than anything just proven to myself that I can play at this level again. I’ve worked my way back into one of the players that can win events.”

A Tiger in contention on Sunday used to cow the rest of the field into submission. That is no longer the case, not as newer, younger hard-swingers with bulging biceps never knew and don’t much care about the way Tiger used to glare and fist-pump his way across a final round. It was Brooks Koepka who played the villain at last year’s PGA, matching every great Tiger shot in front of him with one of his own, eventually adding a second major of the year and third of his career to his own shelf.

“I think I spoiled everybody of their dreams the last time we played, so, sorry,” a grinning Koepka said Tuesday. “But yeah, it would be cool to see him win. I think everybody in the field would love to stop him. I mean, I enjoyed stopping history. I had a great time. But taking myself out of it, I think it would be absolutely incredible to watch. It would be incredible to see. We all know he’s back. There’s no doubt about that.

“I wouldn’t be surprised this week if he’s knocking on the door.”

Maybe Tiger used to knock those doors down with ease, and maybe it seems crazy that 14 years have elapsed since Woods last knocked it down at the Masters, a decade since he last won a major at all. Trust him — it seems nuts to him, too.

“I would say that I wouldn’t have foreseen that, for sure,” he said. “After I won my 14th, I felt like I still had plenty more major championships that I could win, but unfortunately I just didn’t do it. I put myself there with chances on the back nine on various Sundays and just haven’t done it. You know, hopefully this year, I put myself there again, and hopefully I’ll get it done.”

In deference to the transcendent career he has already logged, Woods was probably right when he said he doesn’t “need” to win another major so much as he “wants” to, even if he really, really wants to. But given where he is now — no pain, no scandal, no fear — what better place to get it?