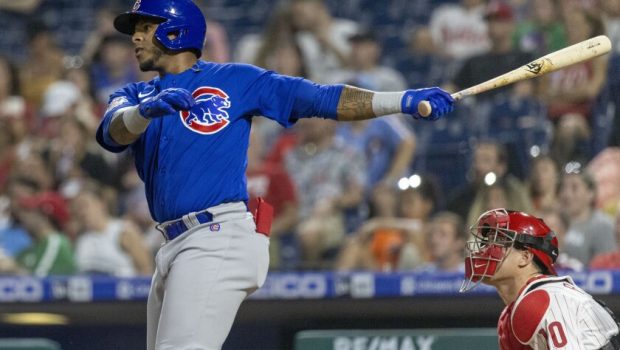 BLOWOUT PROVES PHILS NEED TO TRADE FOR A STARTING PITCHER!

The Phils got their doors blown off by the Cubs.

And even though they are still ahead of thew Cards for the third wild card spot, it is obvious:

THE PHILS HAVE TO TRADE FOR ANOTHER QUALITY STARTER!

With the Cubs ahead by nine runs, Phillies interim manager Rob Thomson sent Stubbs to the mound in the ninth. Velázquez connected for his second home run in as many innings, a three-run shot to left field off Stubbs that made it 13-1. Two batters later, Suzuki cleared the wall in center with a two-run drive.

“To be honest, I hate facing position players,” Velázquez said. “Some position players throw really slow, others throw harder. Sometimes you really don’t know what they want to throw. They’re trying to get you out. I just tried to be easy and not do too much.”

When Velázquez’s drive cleared the wall off an 84 mph Stubbs fastball, he became just the second Cubs player since at least 1901 to come off the bench and hit two homers. Thad Bosley also did it on Aug. 12, 1985, against Montreal.

Ian Happ and Suzuki each had four hits and Christopher Morel added three hits for the Cubs, who won their second in a row after losing nine straight.

Kyle Schwarber upped his NL-leading home run total to 30 with a solo drive in the first inning for the Phillies. Darick Hall contributed a pinch-hit homer with two outs in the ninth.

Chicago entered with the fourth-fewest wins in the majors while Philadelphia is in the thick of the NL wild-card playoff race. The Cubs outhit the Phillies 19-6.

“One of those outings you have to grind through,” Steele said.

“Maybe his command was off a little bit,” Thomson said.

It was 1-all when Philadelphia’s sloppy defense in the fifth helped the Cubs score six times.

After Alfonso Rivas drew a leadoff walk, Morel followed with an RBI double and wound up scoring on the play when first baseman Rhys Hoskins made a wild throw that went into center field.

Happ hit an RBI single that finished Gibson and Nico Hoerner greeted right-handed reliever Jeurys Familia with a two-run double to left. Patrick Wisdom followed with another run-scoring double for a 7-1 lead.