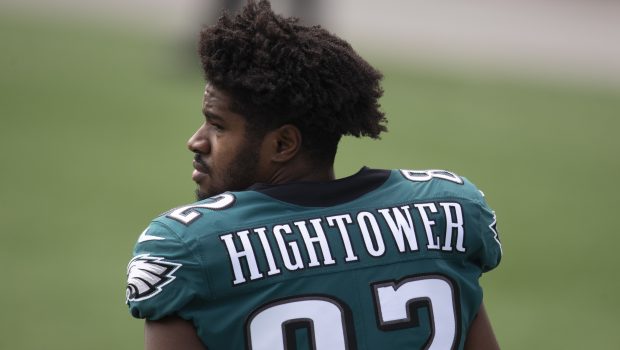 THIS 59-YARDER IS WHY EAGLES TOOK JOHN HIGHTOWER IN 5TH ROUND!

John Hightower secured one of two targets for 59 yards in the Eagles’ 22-21 win over the Giants.

As was the case in Week 6 against the Ravens, Hightower’s one reception covered plenty of ground, and it came at a critical juncture.

The rookie got loose down the right sideline for his 59-yard grab with the Birds down by 11 and 6:05 remaining, setting up the Eagles at the Giants’ 14-yard line ahead of what would be one of two fourth-quarter touchdowns.

Hightower has lived by the big play in the last two games, but he’s still been unable to fully capitalize on the plethora of injuries to the Eagles’ pass-catching corps. He’ll look to offer his downfield dimension once again versus the Cowboys in a Week 8 battle on Sun., Nov. 1.