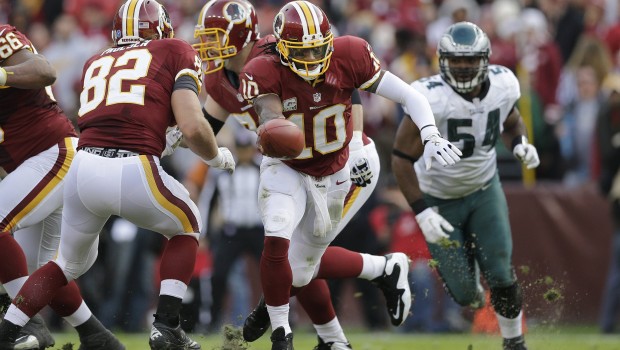 THINK ABOUT RG3 IN AN EAGLES UNIFORM IN 2015

No matter what the Redskins do it seems to fall to pieces.

Which is what the Skins may be doing after the season since they have just benched the third-year QB again in favor of Colt McCoy.

Here is what Grantland.com’s Bill Barnhard thinks of his chances of being in Philly in 2015:

Oh boy. This is the nuclear option for everyone involved, and yet for everybody involved, it makes a lot of sense. Chip Kelly hasn’t had a mobile quarterback capable of scaring opposing teams with the zone-read since Michael Vick hit the bench last season, and even with his limitations after knee surgery, Griffin would qualify.

The offense that Kelly runs in Philadelphia shares some similarities to what Griffin ran in college, given their shared usage of the read-option and emphasis on both spreading the field and using tempo as an offensive asset. And Kelly, who recruited Griffin out of high school, has no qualms about acquiring a damaged quarterback if he thinks he can mold him into a worthwhile starter. Is Griffin really a worse case than Mark Sanchez?

The fly in the ointment is Washington, which might hesitate to deal its former franchise quarterback inside the division out of a fear he’ll come back to beat D.C. twice a year. That being said, if Washington is already so sure that Griffin’s not worth holding on to, why would it be concerned about dealing Griffin to a rival? If anything, if it’s that sure he’s going to fail wherever he goes, why wouldn’t it be aggressive about dealing him to Philadelphia in the hopes he’ll blow up their locker room? This would be the most fun destination for Griffin.