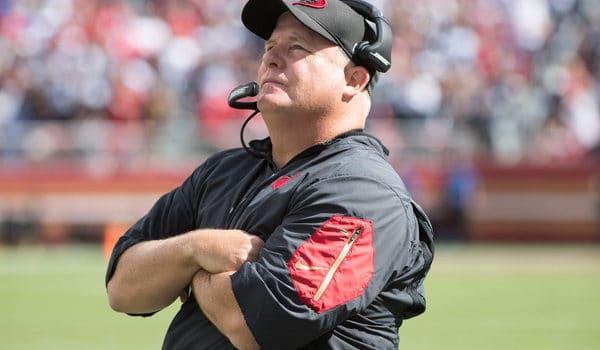 ON THIN ICE: EAGLES WASHOUT CHIP KELLY MAY FACE AX BY THE BAY!

After having been fired by the Eagles last Dec. 29, Chip Kelly is in trouble in San Francisco.

According to Jason La Canfora of CBS Sports, 49ers ownership is open to a major overhaul from the front office down, with general manager Trent Baalke said to be likely to lose his job.

Owner Jed’s York’s parents, John and Denise, may take on a larger role in running the franchise, and they’re known to be big Mike Shanahan fans. Shanahan has spoken to the Yorks in the past and been connected to openings, and they could target him in a coaching or front office role.

What does that mean for coach Chip Kelly? His future is murky, but he’s not in as much danger as Baalke, who would be a “surprise” retention. Ultimately, the final say on Kelly’s future will lie with the front office, to be decided after the changes are made there.

Baalke has previously taken responsibility for the fact that the 49ers are 6-22 since the start of the 2015 season. It looks like he’ll be the most prominent member of the organization to take the fall, too.