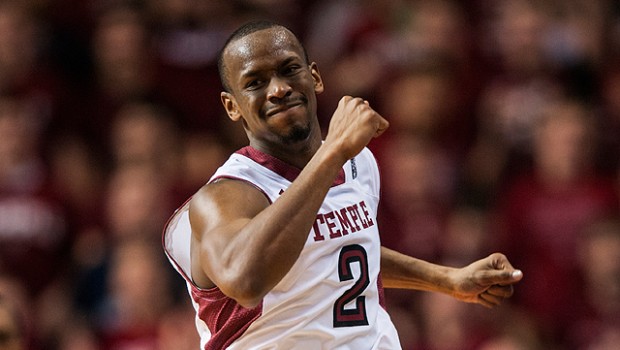 Villanova got revenge against Georgetown last Saturday for a pounding it took on the road and last night was Temple’s turn over Cincinnati.

The Owls got waxed by 31-points at Cincy three weeks ago. And last night Temple returned the favor, winning 75-59 at the Liacouris Center.

A fellow named Will Cummings (photo above), who was hurt three weeks ago. Last night he put a big hurt on the Bearcats.

On Cincinnati’s first possession, Cummings stripped Octavius Ellis and raced in for a layoff that had the Owls off and running to their sixth straight win.

“I just tried to do the best that I could,” Cummings said. “It just so happened that he was careless with the ball and I was in the right place at the right time.”

“I thought he had a terrific game for us in every aspect: Defensively, creating loose balls for us, getting it to the rim and his passing was on target,” Temple coach Fran Dunphy said. “He had a couple of jumpers that he stepped up and shot that I thought he had no doubt were going in. I think he was certainly a key to our victory, but I didn’t sit there and think, ‘Ok, that’s how the game’s going to go,’ But I thought he was terrific today.”

As it turned out, that’s exactly how the game went for the Owls (18-7 overall, 9-3 American Athletic). Cummings’ steal set the defensive tone, and Temple led from start to finish. The Owls went up by as many as 20 in the second half, and never gave the Bearcats any hope of pulling off a comeback.

Most of that offense started on the defensive end. Temple forced 17 turnovers, which led to 27 points. Nothing the Bearcats did, shooting 52.4 percent overall and 43.8 percent from 3-point range, could offset their sloppiness with the ball. Of the 17 turnovers, 11 came in the first half and the Owls scored 19 points to open up a 36-25 lead at the break.

Cummings played all 40 minutes and finished with a game-high 21 points, five assists and had four of the Owls’ 10 steals. Temple is 6-0 since he returned to the lineup.

“He’s great,” forward Jaylen Bond said of Cummings. “He’s our leader on the court. He’s our coach on the floor.”

“He’s so versatile defensively,” Dunphy said of Bond. “He can guard people on the post and if we get stuck with him on the perimeter with a point guard, you don’t have any fear. And he’s such a terrific rebounder as well. He didn’t kill it on the glass tonight, but I thought his inside presence was good for us defensively and I think he’s the key to us getting better.”

Jesse Morgan, the mid-season addition from Massachusetts. Morgan scored 12 points, all from deep. He was 4-for-9 from beyond the arc. Two of those threes came in an early burst in which Temple scored 10 of its first 11 points off Cincinnati turnovers to open up a 15-5 lead.