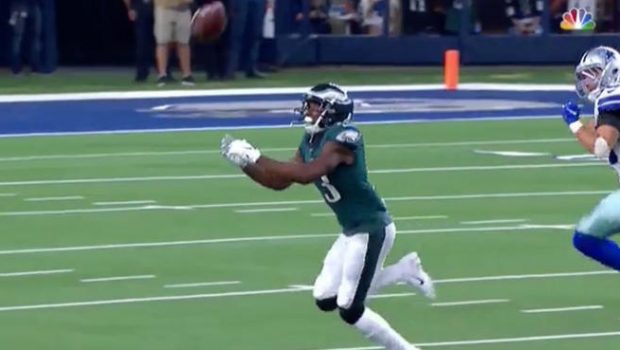 ‘THERE’S NOTHING BUT PUPPY’ IN EAGLES AGHOLOR, SETH JOYNER SAYS!

Early in the fourth quarter of last night’s Eagles’ 37-10 loss to the Cowboys, Agholor separated from Cowboys safety Jeff Heath on a deep ball from Carson Wentz

Agholor lowered his hands and the ball flew by.It’s a ball Agholor has to catch.

He didn’t even try.

“I tried to get open,” he said. “I was hauling tail, make a move on the safety, use the space that I had to run across the field, and I was running and by the time I was trying to track it, the ball was already out of position. I wish I was able to get there, but I don’t know what happened. … I don’t know if he was rushed or whatever, but we had enough field and I was trying to get there”:

Seth Joyner had some tough words for Nelson Agholor's lack of effort.

"Deep down inside, there's either some pitbull, some dog in you or there ain't. There's nothing but puppy in him." ?https://t.co/UZDlguMxwy