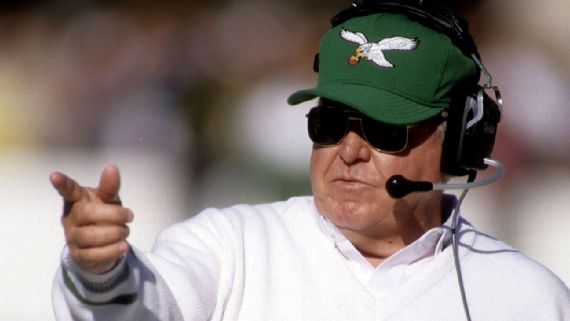 THE WIT AND WISDOM OF THE EVER-QUOTABLE BUDDY RYAN

1. “Kevin Gilbride will be selling insurance in two years.”

Instead of offering an apology, this is what Ryan told reporters after punching offensive coordinator Kevin Gilbride on the sidelines when they coached together with the Houston Oilers.

2. “Some say the 46 is just an eight-man front. That’s like saying Marilyn Monroe is just a girl.”

Ryan’s defense with the Chicago Bears in 1985 allowed a total of 10 points in three playoff games en route to a Super Bowl victory.

3. “QBs are overpaid, overrated, pompous bastards and must be punished.”

That was an actual quote from Ryan’s playbook.

That’s how Ryan described running back Michael Haddix. Haddix is the only running back since the merger (minimum 500 attempts) to average worse than 3.1 yards per carry.

Ryan summed up his thoughts on running back Earnest Jackson.

6. “Football kickers are like taxi cabs. You can always go out and hire another one.”

7. “Offense my butt. Our offense is for Randall to make five big plays and we’ll win.”

Perhaps no coach in history has summed up his offensive philosophy more accurately and more succinctly.

8. “If you listen to the fans, you’ll be sitting up there with them.”

When Bill Belichick was coaching the Cleveland Browns, he attributed this quote to Ryan.

9. “It was so easy my wife could have made them, and she didn’t even know these guys.”

Ryan explained that he didn’t find making roster cuts to be all that difficult.

10. “We might have the worst bunch of guys together we’ve ever seen as a football team. I don’t know what anybody else has, but I’d trade mine with anybody, sight unseen.”

Ryan left no room for interpretation about how he felt about his roster of replacement players with the Eagles.