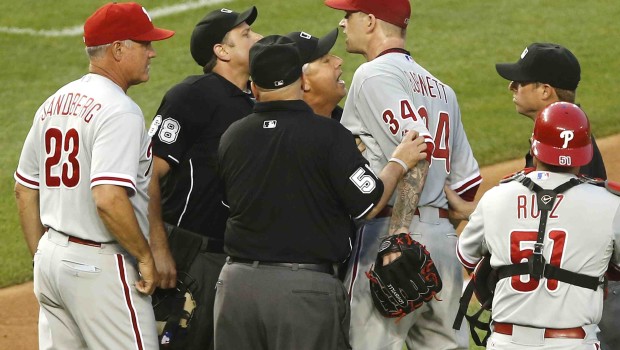 THE WHEELS ON THE PHILS' WAGON ARE OFFICIALLY COMING OFF

A. J. Burnett’s trouble started in the bottom of the second inning when Anthony Rendon drove a Burnett sinker into the seats in left-center field for a three-run home run that gave the Nationals a 5-0 lead over the Phillies en route to an 11-0 waxing on Saturday at Nationals Park.

Earlier in the at-bat, though, Burnett was surprised at a pitch home-plate umpire Chris Guccione called outside.

After the call, Burnett said he calmly inquired to Guccione about whether the pitch missed outside. Guccione replied that it did. Burnett returned to the rubber and proceeded to throw before Rendon got a hold of the 3-1 delivery.

Jayson Werth then stepped to the plate, and Burnett, angry about the previous call, purposely threw the first pitch significantly outside. He looked at Guccione, gestured with his hand and said, “That’s outside.”

This time he wasn’t asking Guccione. He was telling him.

And that was all the umpire needed to hear before he sprinted out from behind home plate, removed his mask and tossed Burnett from the game after just 1 2/3 innings (photo above).

“That one to Rendon looked like something that he had called already in the game,” Burnett said. “That’s the thing: You throw a pitch that you think that’s been called already, and you expect it to be called again.”

Manager Ryne Sandberg then jogged onto the field for an explanation and to protect his player. The skipper’s argument was that Guccione was too quick in ejecting Burnett. After all, he was the starting pitcher, and the Phillies’ bullpen went 6 1/3 innings Thursday night when Cliff Lee left the contest with a left elbow strain.

But the point was moot. And after the discussion escalated to a screaming match, Sandberg was also thrown out .

“I thought both guys were in the wrong,” Sandberg said. “A.J. can’t get tossed there on his part and the umpire, I thought, was a little early on the ejection.”

The tempers didn’t stop there, though. After Sandberg was tossed, Burnett sprinted toward the four-member crew and needed to be restrained by second-base umpire Tom Hallion as he yelled at Guccione. Burnett wouldn’t disclose what his message to Guccione was when he spoke after the game.

Sandberg and Burnett left the field after several minutes. But the manager was then faced with an even bigger problem: finding the arms to get the Phillies through this game after such a taxing night in the series opener on Thursday.