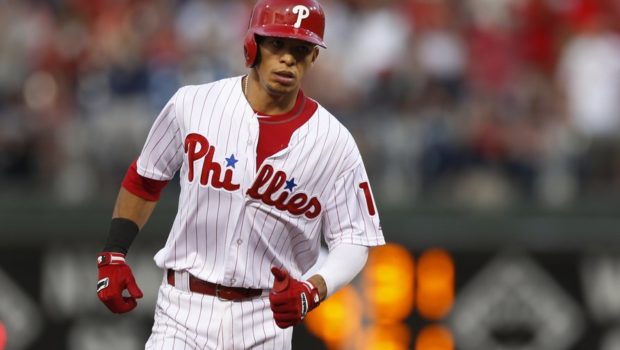 THE SOUND OF SILENCE: PHILLIES’ BATS GO QUIET AGAINST NATS

The Phillies managed just nine hits in the series sweep by Washington.

“We’re up and down,” Phillies manager Pete Mackanin told MLB.com. “We have our streaks where we’re hot and cold. Still, if you look at the season-long statistics, we’re still close to the bottom in a lot of categories. So we need to improve in that department.”

“We’re going to continue looking [for offense],” Mackanin said. “You take a guy like Cesar [Hernandez, above] — he’s really made strides. You look at Freddy [Galvis] — 15 home runs and going on 60 RBIs, plays an outstanding shortstop. [Maikel] Franco needs to get back to where he needs to be. There’s enough guys. [Odubel] Herrera is hitting .280, even though he’s not having a good second half. [Aaron] Altherr looks like he’s got a good-looking future ahead of him.

“So we have enough here to get excited about, but they have to start producing.”

Herrera had been one of the team’s brightest spots in the first half of the season, earning his way as the Phillies’ only representative on the National League All-Star team. Since he learned he made the team on July 5, he has hit .247 with three home runs, 10 RBIs and a .656 OPS. He hit .303 with 10 homers, 32 RBIs and an .833 OPS beforehand.

“I wouldn’t call it regressing,” Mackanin said about Herrera’s second half. “You talk about the sophomore jinx. If this is his sophomore jinx and he’s hitting .280, I’ll take it. He’s got a lot of things to figure out, but perhaps the All-Star Game changed him a little bit and made him a little more comfortable. It’s hard to say.”

Herrera said he doesn’t think he has become lax since the All-Star Game.

“Not really,” he said. “Actually, now I’m hungrier. I want to go back there. I know that it takes a lot of work to be there with all those star guys. I know why you would think that it made me feel comfortable because I’m not doing what I was doing before, but no, no, I’m hungry. I want to get better.”

The Phillies hope more than just Herrera picks up their hitting entering the season’s final month. They need it.