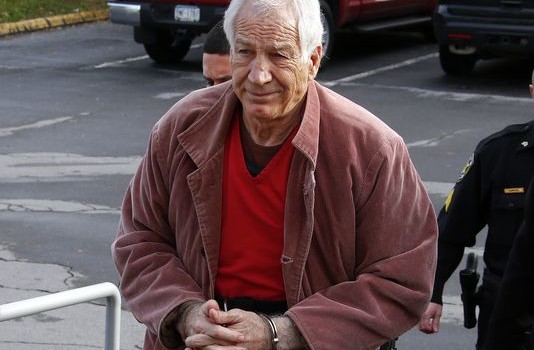 THE PHONY AND PATHETIC ‘VICTIMIZATION’ OF PENN STATE

When is Penn State president Eric Barron going to stop his pathetic attempts to portray the university as the victim in the aftermath of the Jerry Sandusky sexual abuse scandal?

Our society has a maddening and deplorable habit of cheapening legitimate claims by aggrieved parties. Too many cases are likened to games, in which someone “plays the victim” or “plays” assorted “cards” (race, gender, sexual orientation, etc.).

A popular version involves blaming the media for your own mess. Another is blaming the casualties that you caused. Sadly, when a number of culprits cloak themselves in innocence and the dishonorable claim to be disadvantaged, we become calloused to true sufferers of abused and misused power.

Barron makes it sound like the university — not the dozens of youths assaulted by convicted child molester and former assistant football coach Jerry Sandusky — has been oppressed.

“Unfortunately, we can’t control the 24/7 news cycle, and the tendency of some individuals in social media and the blogosphere to rush to judgment,” Barron wrote in an open letter last Sunday after a judge’s ruling put the scandal in headlines again. “But I have had enough of the continued trial of the institution in various media. We have all had enough.”

If that was the case, if Penn State really were tired of Sandusky besmirching the school’s name, it shouldn’t have sued its insurance company three years ago. Instead of eating the millions of dollars in settlement claims as it knowingly keeping a pedophile on the payroll, the school opened itself to further scrutiny by trying to pass the bill to Pennsylvania Manufacturers’ Association Insurance Co.