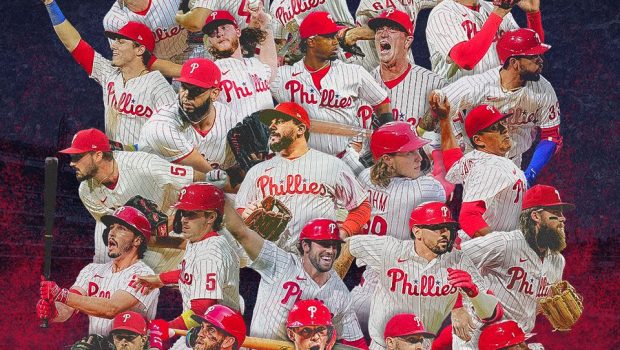 The Phillies are headed to the postseason.

They locked up MLB’s final playoff spot – their first since 2011 – defeating the Astros 3-0 in Houston behind a masterful performance by starting pitcher Aaron Nola.

The Phillies right-hander had a perfect game broken up in the bottom of the seventh inning, recording nine strikeouts in 6 2/3 innings of work. His outing marked the longest Phillies’ perfect-game bid since Roy Halladay’s perfect game in 2010.

Kyle Schwarber also extended his National League lead with home runs No. 45 and 46 in his eighth multi-homer game this season.

The Seattle Mariners snapped what was a 20-year MLB playoff drought Saturday, briefly giving Philly the longest drought in the majors. The team didn’t see a postseason appearance from 2012 to 2021 after five straight trips between 2007 and 2011.

The Milwaukee Brewers were officially eliminated from postseason contention with the Phillies’ win.

Entering Monday, a Milwaukee loss alone would have also given Philly its berth, but the Brewers were able to rally past the Diamondbacks 6-5 in a 10-inning, walk-off victory.