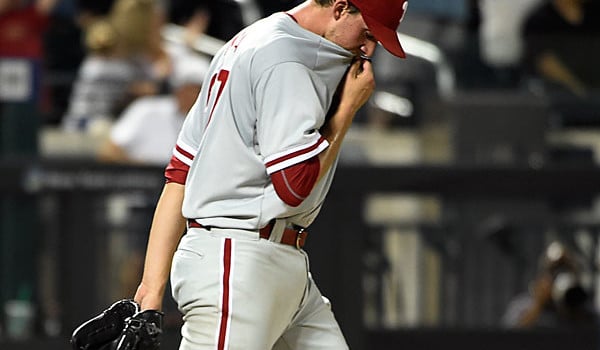 THE NIGHT EVEN ACE AARON NOLA CAME UP EMPTY FOR THE PHILS!

You know the Phils are in trouble when even ace Aaron Nola has no answers.

And that’s what happened last night in Atlanta against the Braves who played without Ronald Acuna Jr., and Ozzie Albies, stars who are injured.

Marcell Ozuna homered twice and drove in four runs as Atlanta roughed up Nola and the Phillies 11-2.

Travis d’Arnaud and Ozuna hit back-to-back homers off Nola in a four-run third inning. D’Arnaud, who drove in three runs, and Ozuna each got three hits.

Ozuna and d’Arnaud were free-agent signings who are proving to be valuable additions.

Ozuna has hit seven homers, d’Arnaud has four and the two share the team lead with 17 RBIs.

The Braves have won four of their last five games.

”It will be nice to see when we get everybody back what we could do,” Braves manager Brian Snitker said. ”We’re doing really good without two of our bigger pieces.”

The Phillies bolstered their bullpen with two trades. In the biggest deal, announced during the game, they obtained right-handed pitchers Brandon Workman and Heath Hembree from the Boston Red Sox in exchange for right-handers Nick Pivetta and Connor Seabold.

Their bullpen ranked last in the majors with an 8.07 ERA at the start of the day. There was more shaky relief against the Braves, but an unusually short start from Nola forced the Phillies to play from behind in their fourth straight loss.

”It stinks,” Nola said. ”Learn from it. Get back at it tomorrow.”