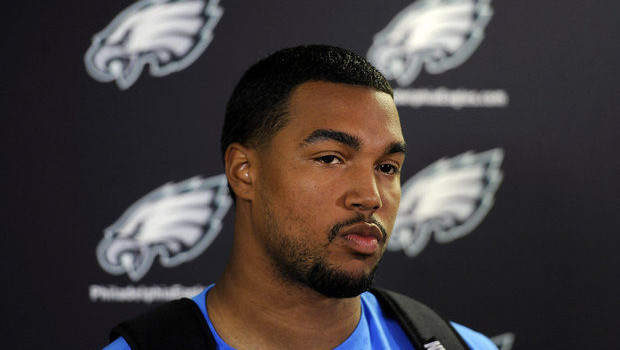 Try as he might, nothing Marcus Smith has done in training camp prepared him for the reality of his first game action.

”When I first got out there it was like, ‘This is it, I’m in the NFL. Wow,” the Birds’ top draft pick said. ”You’re playing your first NFL game it takes a while for it to all set in. Then, as the game went along, I got into the flow more, and it’s just playing football again.”

Smith, from Louisville and the 26th overall pick in last May’s draft, is being eased into action in Eagles defensive coordinator Billy Davis’ 3-4 defense.

The rookie has taken snaps in practice at both outside linebacker positions, backing up veteran starters Trent Cole and Connor Barwin.

Smith played over 40 snaps in the Eagles’ preseason opener Friday night in Chicago. He was mostly on the left side, where Davis employs the ”Jack” linebacker, and spent some time on the right side, where he rushed the quarterback.

”I’m getting there,” Smith said after Monday’s walk-through before leaving for a three-day joint practice with the Patriots. ”I feel I’m learning something every day and getting better every day. By the time that first game rolls around, I’ll be ready to go.”

Despite the fact that he finished second in the nation in sacks last year with 14 1/2, the rookie looked better against the run. He also did well in coverage, where he knocked away one pass and made a great play to tackle wide receiver Josh Morgan for a loss, only to be negated by a penalty on the other side of the field.

In a dozen or so pass rushes, he had one hurry.

”It’s very fair to say that,” Davis said of Smith being better in coverage and against the run. ”I think you saw his athleticism. Again, those guys are thinking a lot. The very first preseason game is always their hardest. They have the most nerves. They have the ‘wow’ factor. They’re in the NFL.

”That settles after a couple plays, couple quarters. Now you typically see the second third and fourth preseason game with young guys, you see big growth because the nervous part, the, ‘Oh, my God, that’s Jay Cutler over there,’ whoever it is, is kind of gone.”