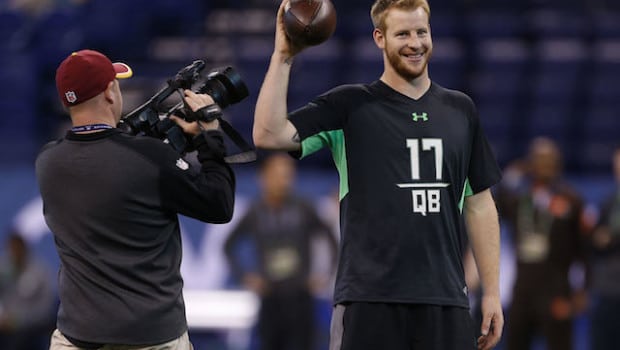 NFL COMBINE IS 40 YEARS OLD: DOES IT STILL HAVE VALUE TO EAGLES?

The NFL annual Scouting Combine for 2022 occurred in March in Indianapolis, an event during which players who applied for the Draft are tested on their physical qualities.

We present the main exercises and the records (top performances) that have been performed.

A Brief History of the NFL Combine

The event was created in 1982 by an observation made by Tex Schramm, then GM of the Dallas Cowboys.

Simple observation: it is necessary to centralize the evaluation of young prospects who are ready to join the NFL. Indeed, until then, each team had to invite the young players they wanted to test and see at work.

In 1982, the first major camp was created, the National Invitational Camp (NIC), an event that took place in Tampa, Florida, for its first edition. Other camps were created in successive years as the existing ones were not suitable for all teams. However, the NIC grew in importance and, in 1985, merged with other camps to form the NFL Scouting Combine.

Held in Arizona, then in New Orleans in 1985, then in 1986, it moved to Indianapolis in 1987, a city it has never left. Each year, approximately 330 prospects are invited to the NFL Scouting Combine.

Top Performances at the NFL Combine

The Test: Vertical rebound is essential when playing in certain positions, and this test measures it. The measurement? Nothing could be simpler: the athlete jumps without momentum and will touch marks with his fingers indicating the height he has reached.

Dating back to 2005, this record is owned by former North Carolina safety Gerald Sensabaugh. If we convert to centimeters, this equals just under 117 cm.

Former Tennessee State long jump champion, the Jacksonville Jaguars, will be drafted in the 5th round. He will play eight seasons in the NFL, in Jacksonville, then in Dallas with the Cowboys.

Note that the 2nd and 3rd best marks in history in this event were also made in 2005, the year when prospects could touch the stars.

The Test: After the high jump, the long jump! The player starts without momentum and must jump as far as possible: this event is very different from the so-called traditional long jump, which can be found at the Olympic Games. However, for the record, this long jump without momentum was an Olympic discipline until 1912, and Norway still organizes a national championship.

Incredible athlete Byron Jones, the former Cowboys cornerback, is the only player to exceed 12 feet with this jump in 2015. By making the conversion, this record exceeds 3.70. This performance allowed, among other things, the former Connecticut defensive back to be selected in the 1st round and has since asserted himself as a solid player in his position.

The Test: Three cones are placed 5 yds apart, forming a right angle (at the middle stud). The player starts from a plot and will touch the plot in the middle. He returns to the starting block he will touch, then runs again towards the middle block. There, he bypasses this cone from the outside and goes towards the last cone, around which he will turn like a figure eight loop. He then runs to the middle block, which he still goes around to the outside, and returns to the starting block to complete the exercise.

This record has been the preserve of former Oklahoma cornerback Jordan Thomas since 2018. Typically, receivers and defensive backs are the top performing players in this drill. Note that Thomas was not drafted, paying for his poor performance in the other events.

The Test: Three cones are placed side by side, each time separated by 5 yds. The player starts in the middle and will touch the block opposite to his so-called strong leg. It will then change direction and touch the opposite cone before changing direction again and returning to the middle cone. He will have traveled a total of 20 yds (just over 18 meters). This event assesses a player’s speed and change of direction.

The only record on this list was co-held by two players. This mark was first achieved in 2006 by University of Tennessee cornerback Jason Allen. Impressive throughout the Combine, he was drafted in the 1st round by Miami but never lived up to his potential. He played in the NFL until 2013, passing through the Houston Texans and then the Cincinnati Bengals.

The other player to achieve this time is Brandin Cooks, a wide receiver from Oregon State currently at the Los Angeles Rams. A supersonic player, he also played for the New Orleans Saints and in a Super Bowl with the New England Patriots.

Though these are not all the top performances in the NFL Combine history, they are worth mentioning.