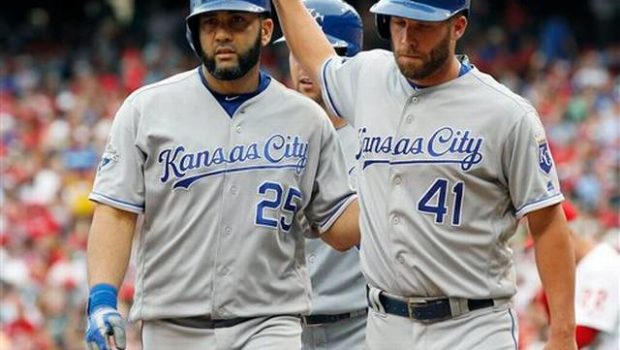 THE MORALES OF THE STORY: PHILLIES SPANKED BY ROYALS 6-2

The Phillies fell victim to the hottest hitter in baseball.

Kendrys Morales (above left), the designated-hitter-turned-right-fielder put a second-inning pitch from Aaron Nola into the right-field seats to cap a five-run inning for the Royals in their 6-2 win over the Phillies at Citizens Bank Park last night.

He added a second from the other side of the plate in the eighth for his third home run in the last two days and seventh in his past 13 games. Over that span, Morales is batting .565 (26-for-46) and has driven in 21 runs.

The three runs that scored on Morales’ second-inning blast were all the Royals needed behind 8 2/3 innings of two-run ball from Danny Duffy, but they had already plated two runs earlier in the second on RBI singles from Duffy and Whit Merrifield.

“He’s been great,” Royals manager Ned Yost said of Morales. “It’s worked out really, really good. We’re in this little run of National League parks. The first couple of days it was kind of just being interested to see what would happen [with Morales in right]. And now it’s just, ‘Hey, it’s worked out really well.’

“To get that hot bat in the lineup is great. And he has done OK out there. He hasn’t hurt us. He’s carrying us right now.”

Duffy held the Phillies scoreless for seven innings after Peter Bourjos tripled and Maikel Franco singled him home in the first. A ninth-inning rally kept Duffy from his first career complete game and gave the Phillies their second run on a Cesar Hernandez RBI single.

“Duffy’s got good stuff,” Phillies manager Pete Mackanin said. “Boy, he’s a tough pitcher. I liked what I saw from him. … Three infield hits, not much to talk about. But Duffy’s tough. I like him.”

“Obviously, it’s cool to finish a game,” Duffy said, “because those guys in the bullpen have picked me up so many times when I’ve been inefficient. So if I got the opportunity to, might as well try to save another day.”

After taking two in St. Louis to begin the road trip, this win gives the Royals as many over their last four games away from Kauffman Stadium as they had in their previous 14.