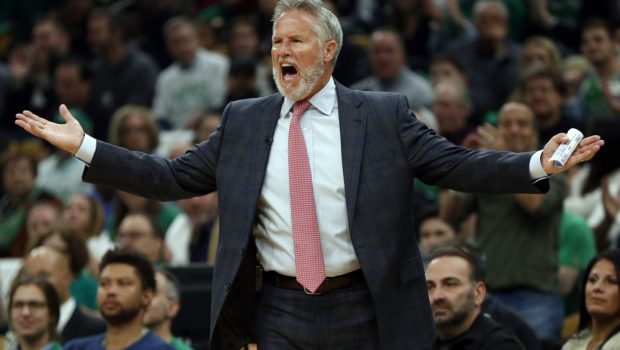 THE MEDIA (INCLUDING US) GOT SIXERS BRETT BROWN STORY WRONG!

Here’s what I know about Sixers coach Brett Brown getting the go-slip and not the pink slip for 2019-20:

— He was never in jeopardy of losing his job, especially considering that the team did better in the postseason this season than last season.

— The Sixers, especially managing partner Josh Harris, do a piss-poor job of communicating.

If you get all of your “information” by searching the Net for facts and factoids you were convinced that Brown was a goner.

That’s what happens if you exist solely within the Twitterverse in which anyone with an opinion can express it and gain followers creating a phony meme.

We exist in the real world, in which real people are quoted by real reporters and extrapolations are made.

By now you should know that the only opinions that matter are those of the decision-makers. And Harris and GM Elton Brand never were quoted anywhere this season negatively addressing Brown’s job status.

Harris did make some comments in March and then before the Nets series about his expectations for the team — but crickets about Brown’s job security.

I write this even though this site posted a report from the New York Times’ stellar NBA reporter Marc Stein that said Brown would be gone if the Sixers didn’t make the NBA Eastern finals, which as you may know they did not.

Stein ran a mea culpa because his sources — unidentified and unquoted NBA execs — were wrong and, we posted that yesterday.

I bet you won’t see any corrections from dimwits like Howard Eskin, Angelo Cataldi, Crossing Broad — especially on Crossing Broad, which approaches sports and especially the Sixers as if they were a movie review for Rotten Tomatoes with no depth and no context — and Phily.com which hinted at and outright reported that Brown was a goner. As late as today, columnist Bob Ford is throwing shade at Harris and Brand’s version of events.

No one stoked the Brown Will Go If meme more than Mikey Miss, which is surprising because Mike Missanelli and Tyrone Johnson are both NBA-heads and very level-headed.

(Not so surprising considering Mikey and Sal Paolantonio concocted the “Do the Trade” campaign out of whole cloth back in 2014 when Marcus Mariota was available at QB for the Eagles.)

I thought Brown did a good job this season, especially when you consider that he had to adjust twice after the major trades for Jimmy Butler and then Tobias Harris. It may seem easy to coach up new good players who show up in November and February, but it is not.

Also, in the Eastern semis last season Brown was woefully outcoached by the Celtics’ Brad Stevens. This season, Brown outcoached the Nets’ Kenny Atkinson and more than held his own against the Raptors’ Nick Nurse.

I still have a problem with his offensive sets, especially his play-calling. Witness game 7, when he called a timeout with the game tied at 85 and 3:13 left. He drew up a play and the Sixers couldn’t get a shot off in 24 seconds.

I expect the Sixers to re-sign free agents Butler and Harris and to develop Zaire Smith as useful bench player, joining James Ennis and Mike Scott. I also expect them to draft or sign a back-up center who can spell Joel Embiid for more than 8-10 minutes, which is all Boban Marjanovic could do.

The Sixers made demonstrable progress this season:

They lost in a gut-wrenching seventh game on a four-bounce buzzer-beater by Kawhi Leonard, one of the best players in the NBA.

Last season they were zipped in five by the dreaded Celtics in the same round.

And if you don’t think that’s progress, ask Brad Stevens, the former genius whose Celtics went down in 5 to the Bucks.