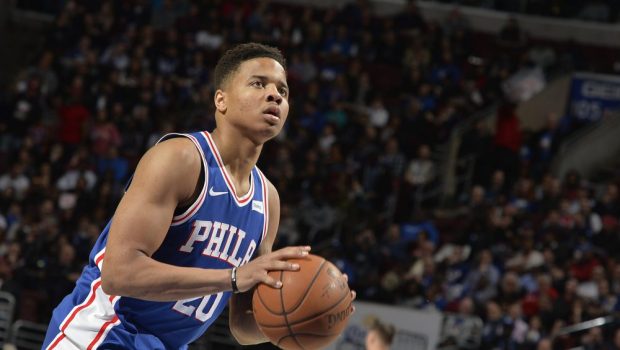 THE MARKELLE FULTZ STORY: WHAT’S UP WITH SIXERS MYSTERY MAN!

Maybe the Celtics knew something no one else did when Boston traded its first overall pick in the 2017 NBA draft to Philly.

The Sixers felt giving up their third pick and a future first-rounder was worth it to guarantee that Markelle Fultz, the 6-4 transition-scoring, keen-defending, sharpshooting, playmaking Washington Huskie out of Maryland, would wear white, blue, and red that fall.

Fultz seemed like a slam-dunk pick, and the Sixers envisioned him playing next to their franchise guard from the future, Ben Simmons.

“We are very pleased with the outcome of this trade, which puts us in the enviable position of selecting first overall in consecutive draft years,” then–Sixers president of basketball operations Bryan Colangelo said. “History suggests that no. 1 has the greatest odds of producing franchise-level talent and we are confident that this year’s draft class has that very potential.”

The Ringer’s Mark Titus wrote this about Fultz while he was still in college:

Fultz is so gifted that his best attributes can change from game to game. Sometimes he counts on the 3-point shot that he’s hitting at a 41.3 percent rate on the season, like when he went 5-for-10 from deep and dropped 25 in a 107–66 loss to UCLA on February 4. More often, he makes his living in the paint by relying on his midrange jumper, change-of-pace dribbling, and array of crafty and unorthodox moves, like when he scored a career-high 37 in an 85–83 win over Colorado in January despite going just 0-for-2 from 3. He can be a traditional point guard and try to get his teammates going with his great ballhandling and court vision, he can crash the glass as well as any guard in America, and he can morph into a solid defender with excellent hands and instincts. In short: You could put Fultz on any team in the country and he’d instantly become its best player.

It was true. And it was true less than 22 months ago.

Since the Sixers drafted him, a mysterious shoulder injury and/or a case of the yips erased his jumper.This is a timeline of the Sixers’ nightmarish two years since they made that fateful trade with Boston: