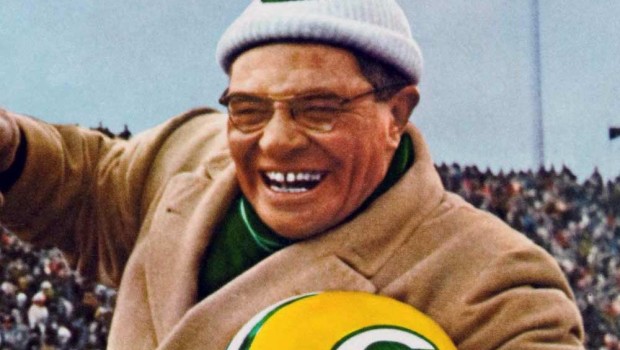 THE LOMBARDI TROPHY: VINCE MADE SUPER BOWL WHAT IT IS TODAY

Several hours after the third Super Bowl ended, Vince Lombardi, who had coached the winning team in the first two but watched this one from the stands, returned home from Miami and placed a call to Dick Bourguignon, his closest friend on the executive board of the Green Bay Packers.

Come on over with Lois. I’ve got something to talk to you about, Lombardi said.

Vince and his wife, Marie, were waiting in the living room of their Sunset Circle home when their guests arrived, and Lombardi took his pal into the den for a private talk. Bourguignon suspected what would happen next. He did not want to hear it. An hour later, Lombardi emerged, kneeled at the foot of Lois Bourguignon and draped his arm around her chair. “This is so hard,” he said, and started to weep.

After nine incandescent seasons as the Packers’ coach, during which Lombardi’s teams won five championships, and one frustrating year a step removed from the players as the team’s general manager, Saint Vincent, the Pope of Green Bay, was saying goodbye.

He had decided to put an end to his myth-making decade in the freeze of the upper Midwest for a fresh start as the head coach, general manager and executive vice president of a struggling team in the most powerful city in the world.

Lombardi was on his way to Washington, lured there by Edward Bennett Williams, the Redskins’ president, who loved his new coach and what he called “contest living” with equal and unremitting passion.

When this happened, Jay Gruden was not yet 2 years old, Mike McCarthy was only 5, and not one player on the current Washington and Green Bay rosters that will meet in a playoff game Sunday at FedEx Field was within a decade of being born. The Packers have gone through eight coaches since then before getting to McCarthy, and the Redskins have had 11 before hiring Gruden (if you count Joe Gibbs only once). A mere five years ago can seem like a different era in the NFL, where the average playing career lasts only 3.8 years, and Lombardi’s decision to leave Green Bay for Washington came nearly a half-century ago.

Vince Lombardi is carried off the field after the Packers defeated the Oakland Raiders, 33-14, in Super Bowl II in Miami on Jan. 14, 1968. (Associated Press)

Ancient times yet still relevant, imbued with meaning on many levels. The events in that long ago winter of 1969 that connected the two cities at once helped shape and refine their football profiles while illuminating larger forces that were transforming the professional game. Although the Packers had won six championships and the Redskins two in the many decades before Lombardi arrived in Green Bay and then Washington, he set the high standards and expectations for success that have prevailed in both franchises since, even during stretches of team incompetence and fan misery.

Lombardi reached Washington only days after a new president, Richard M. Nixon, had been inaugurated, and for a time it seemed the magnetism in the city was not at the White House but in Suite 675 at the Mayflower Hotel, where the coach was temporarily staying, and at the Redskins’ offices a short walk away on Connecticut Avenue.

The smitten Williams had been wooing Lombardi for months, once feeling as if he had been caught in an illicit tryst when NFL executives stumbled upon the two men huddling in the corner of a Manhattan restaurant. Now that he had his man, Williams relinquished his own large corner office to make way.

“Why don’t you go back to your law practice?” Lombardi said to him, only half-jokingly. But Williams could not get enough of this. He provided Lombardi with access to his chauffeur, proffered him with a half-million dollars in ownership stock — considered a lot of money in the sports world back then — and accompanied him with chest-puffing pride toward his regular table at Duke Zeibert’s restaurant, where the patrons rose to greet them with a standing ovation. Thirteen seasons had come and gone since the Redskins had finished above .500. The town was thirsting for a winner.

Out in Wisconsin, there was a profound sense of abandonment. “It is true that our hero has treated us rather shabbily in the end,” a columnist wrote in the Wisconsin State Journal. “Vince Lombardi has gone off, without asking us about it, and made himself a deal in a foreign land to the east. He has cast us aside, and rather roughly at that.” It was the same sense of betrayal that would wash over Packers fans again decades later when their beloved quarterback, Brett Favre, left them for Minnesota, though both men are now forgiven, their cheesehead legends restored.

The reasons Lombardi traded Green Bay for Washington were both deeply personal and broadly cultural. Marie had been struggling with alcohol and prescription drug overuse in Green Bay, and as much as she seemed to enjoy the public adulation in the small town, Vince believed that it was important to get her back to the East Coast, where she might be happier. He also believed it was essential for him to get back to the sidelines.

Watching the Packers stumble through a losing season in 1968 had been so exasperating that the team’s public relations staff felt compelled to sound-proof the general manager’s box so the nearby press corps would not hear Lombardi’s wailing. He had made the decision to step down from coaching impulsively after Super Bowl II and regretted it. He needed to be with the boys.

But there was more to it than that. The game was changing in profound ways. The players were asserting more rights with the NFL Players Association, the balance of power was shifting, and Lombardi believed the only way he could assert the sort of control he wanted was to have an ownership stake in a team. The Packers could not provide that; they were owned by the public. Williams would give it to him.

In taking the offer, Lombardi not only was doing what was best for himself and his family but also illuminating a football contradiction. For years in Green Bay he had preached the mantra of team and institutional loyalty. He had railed against his star fullback, Jimmy Taylor, who wanted the freedom to leave the team for more money. And now, in the end, he was doing the same thing. The team’s executive board reacted to his leaving with more grace and equanimity than Lombardi would have shown himself, with the chairman declaring that the club would not ask for compensation from the Redskins, even though Lombardi was breaking a long-term contract, because they could “not put a price on greatness.”

Impossible to imagine such a statement today. In leaving, Lombardi exposed a sham philosophy — how the concept of loyalty was manipulated by those in sports who had the power to come or go, hire or fire. Here was the issue that would shape the NFL and other major professional sports from then on. NFL Commissioner Pete Rozelle presents the championship trophy to Vince Lombardi after the Packers beat the Kansas City Chiefs, 35-10, in Super Bowl I in Los Angeles on Jan. 15, 1967. (Associated Press)

As Redskins coach, Lombardi still had the magic (unlike his most famous predecessor, Earl “Curly” Lambeau, the Packers’ founder, who had tried and failed to resurrect his own career with two forgettable seasons as Redskins coach in the early 1950s). Lombardi knew how to get the best out of veterans, including the old linebacker Sam Huff, who had been with him on the New York Giants in the 1950s, and rookies like Larry Brown, the unheralded running back from Kansas State who burst into stardom after the coach determined that his problem was bad ears and fitted him with a hearing aid.

And then there was the quarterback, Sonny Jurgensen, as freewheeling as he was gifted, Washington’s equivalent of Green Bay’s golden boy, Paul Hornung. “Sonny, you’re gonna love the guy,” Hornung told him when Jurgensen called with concern about what to expect.

Jurgensen learned what the Packers knew, that Lombardi’s reputation as an old-school disciplinarian was partly for show and that he was remarkably flexible in dealing with football characters — as long as they had talent.

And after his first meeting with Lombardi, Jurgensen also had another realization. His previous coach, Otto Graham, had been a world class quarterback, and Lombardi had been just a stumpy lineman, yet Lombardi could simplify and teach the passing game in a way that no other coach could. The Redskins were revived and finished 1969 with a 7-5-2 record, similar to Lombardi’s first season with the Packers. Super Bowls seemed imminent.

That was Lombardi’s only year in Washington. By the next September, he was dead of colon cancer.

In the history of the Redskins, he is only a blip, perhaps, but that one season restored a sense of hope and pride that persists to this day, through the highs of George Allen and Joe Gibbs to the lows of Bill Austin and Jim Zorn and the troubles of the lackluster past decade and a half.

The Packers suffered through a dark ages epoch of their own after Lombardi left, unable to find the Lombardi magic even when the coaches were his glory days disciples, Bart Starr and Forrest Gregg, but the expectations in Green Bay never faded, either.

The Redskins have won the Super Bowl three times since Edward Bennett Williams got his guy and the Packers twice. Neither team is considered a likely prospect to win it all this year, but when they meet each other late Sunday afternoon, it will be in quest of seven pounds and 22 inches of sterling silver known as the Vince Lombardi Trophy.

David Maraniss, an associate editor at the Washington Post, is the author of “When Pride Still Mattered: A Life of Vince Lombardi,” from which this article is excerpted by permission.