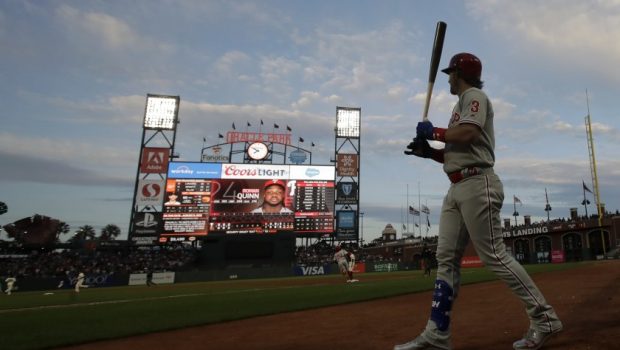 THE LIGHT IS DYING ON PHILLIES PLAYOFF HOPES!

It’s August 9, and the Phillies are hanging by their fingernails to dreams of playing baseball in October.

Here’s where they stand compared to the rest of their National League rivals:

Key series: The Phillies and Nationals could collide in the National League Wild Card Game. They’re lined up for a five-game series in the season’s final week (Sept. 23-26 at WSH), thanks to a rainout from June. And, oh yeah, Bryce Harper used to call Nationals Park home. Sign us up for this one.

Key series: With a large handful of clubs to jump in the Wild Card hunt, San Francisco needs to take aim at the NL Central bloc in the Cubs, Cardinals and Brewers. The Giants’ four-game set against St. Louis (Sept. 2-5 at STL) will be their last opportunity.

Key series: This weekend’s set against the Nationals is huge, but the biggest one after that is probably versus the Phillies (Aug. 30-Sept. 1 at PHI). New York just took care of business against the Padres, Pirates, White Sox and Marlins, and now it’s time to “slay the giants.” If the Mets can dominate the Phillies and Nationals again Sept. 2-4, their storybook run could move even closer to reality.

Key series: Taking two of three from the Phillies this week was a big boost, and a sweep of the Brewers (Aug. 23-25 at MIL) could help the D-backs bring another part of the Wild Card pack back to them.

Key series: Milwaukee still has three series left against the Cardinals and two against the Cubs, so who knows where all three of those clubs will stand by mid-September. But with Chicago currently holding the best postseason odds of the three, the Brewers and Cards might be left battling it out for a Wild Card spot when they meet Sept. 13-15 in St. Louis.

Key series: Same logic applies here as with the Brewers, and we’re circling that same Sept. 13-15 series at Busch Stadium. But really, the Cardinals’ entire September is filled with key matchups, including the Giants, Nationals, Cubs (two series) and D-backs. St. Louis could control its own destiny with a strong finish.

Key series: Washington has already won nine of its 14 head-to-heads against Philadelphia, including four of the five staged at Nationals Park. What better way to lock up a postseason spot than beating one of your archrivals — and former stars — in front of the home crowd in that five-game, final-week series?

Key series: Baseball’s oldest rivals have a home-and-home lined up over the season’s final two weeks, and the first leg (Sept. 19-22 at CHC) is an opportunity for the Cubs to take care of business at Wrigley before the final weekend at Busch Stadium.

Key series: The more chaos between the NL Central’s top three, the better chance Cincinnati has of catching up. Sweeping the Cubs at Wrigley (Sept. 16-18 at CHC) would help the Reds keep in touch.

Key series: A three game set at Nationals Park (Sept. 13-15 at WSH) falls in the middle of the Braves’ 14 consecutive games against the Nationals and Phillies, a run that will essentially define Atlanta’s hopes for a second consecutive NL East title. Roll through this two-week stretch, and the division is wrapped up. But if the Braves stumble, the last two weeks could get nerve-wracking. A strong series in Washington could demoralize a surging challenger.

Key series: Los Angeles’ seventh consecutive NL West title is a foregone conclusion. Taking two out of three from the Braves (Aug. 16-18 at ATL) would likely seal up home-field advantage through the NL postseason, too.