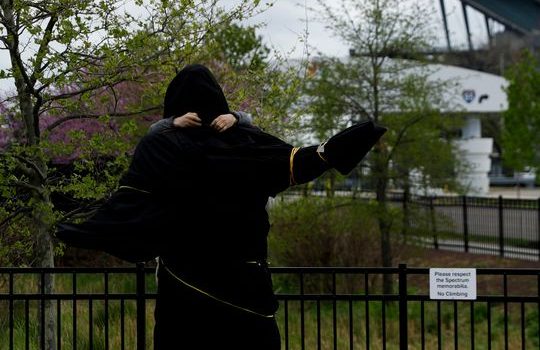 LAST WORD (WE PROMISE!) ON FLYERS THROWING KATE SMITH UNDER THE BUS!

“The Flyers have enjoyed a long and popular relationship with ‘God Bless America,’ as performed by the late Kate Smith, a woman who was awarded the Presidential Medal of Honor for her patriotic contributions to our nation,” the team said Sunday.

“But in recent days, we learned that several of the songs Kate Smith performed in the 1930s include lyrics and sentiments that are incompatible with the values of our organization, and evoke painful and unacceptable themes.”

Smith became a Flyers’ good-luck charm when she performed the song live before Game 6 of the 1974 Stanley Cup finals and the Flyers beat Boston, winning the first of back-to-back Cups.

Her statue was erected outside the Spectrum in 1987 and moved to the Xfinity Live! entertainment complex near the team’s new arena in 2011. It initially was covered Friday with a dark tarp after her song list was first reported by the New York Daily News.

“The NHL principle ‘Hockey is for Everyone’ is at the heart of everything the Flyers stand for,” Flyers President Paul Holmgren said in the statement. “As a result, we cannot stand idle while material from another era gets in the way of who we are today.” The team added that the statue was removed “to ensure the sentiments stirred this week are no longer echoed.”