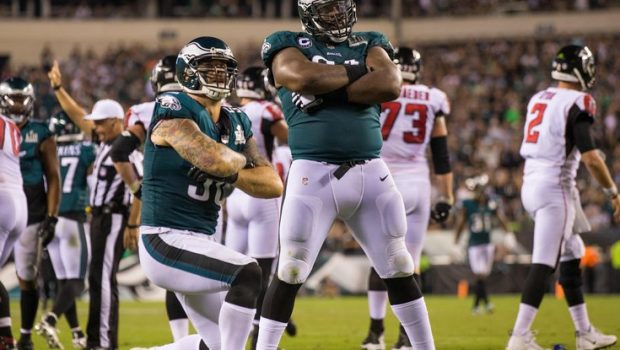 THE IMPORTANCE OF BEING FLETCHER COX, EAGLES DEFENSIVE ROCK!

Cox has benefited the past couple of seasons of playing for defensive coordinator Jim Schwartz, who coaches a front four dominant defense built around a rotation of 8 defensive lineman who’s task is as simple as it gets.

Schwartz has told me in the past that his defensive philosophy can be summed up with two lines. “The defensive lines job is too go break a bunch of S**T, and the linebackers job is to go clean up the S**T.”

So Fletcher’s job on game day is to go create as much mayhem on the other side of the LOS as frequently as he can.

Schwartz has also coached some of the highest paid defensive tackles in the history of the game, including Fletcher Cox. It started with Albert Haynesworth while he was the defensive coordinator of the Tennessee Titans. Once Albert got paid a king’s ransom, the game didn’t seem as important to him.

Then he had Ndamukong Suh in Detroit.

He has been a good player but never seemed to live up to the billing and the hype of being the No. 2 pick in the NFL draft.

While in Buffalo, Schwartz coached Marcell Dareus, also a former No. 2 selection in the NFL draft. Once he was rewarded with a contract north of $100 million dollars his play really receded.

But not Fletcher! In fact, I think his play has been getting better and better the more he plays in this front four dominant scheme.

Unlike the other three superstar defensive tackles mentioned above, Fletcher has avoided an inflated ego, or the perils of riches or any demons that sometimes swallows up athletes because of the new-found riches and success.

He is off to a terrific.

Perhaps his most defining play in the first two games was the touchdown-saving tackle on Devonte’ Freeman at the one-yard line on the Falcons opening drive to the 2018 season. He has a new cast around him this season with guys like Haloti Ngata and Michael Bennett. The philosophy hasn’t changed nor has Fletcher’s attitude. The goal is to repeat as World Champions.

Howie Roseman believes that you win championships by dominating in the trenches. The Eagles are deep and talented on both offensive and defensive lines. They also compete heavily against each other throughout the off season and training camp and throughout the season working to sharpen the fundamentals necessary to dominate on Sunday.

Having gotten to know Fletcher a little throughout his seven years I don’t think motivation will ever be an issue. He has been extraordinarily healthy, never has had a weight issue that so many defensive tackles fall prey to and his love of the sport has not waned through his seven years as an Eagle. And he is very much in the prime to his career at age 27.

It’s good to be the centerpiece for a championship team. Fletcher likes it that way:

DESPITE FAME AND FORTUNE, FLETCHER COX STAYS GROUNDED AS AN EAGLE